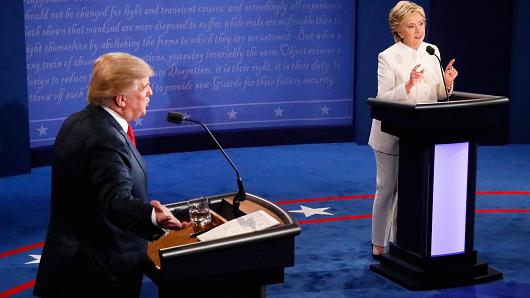 It’s hard to fathom one issue on which both Donald Trump and Hillary Clinton agree, but trade agreements have become the piñata of choice for beating by both parties in the 2016 presidential race.

Both campaigns have tapped into voter anger over U.S. job losses and have placed blame solely on our “evil” trade partners. The most recent swipe was a memo released by the Trump camp discussing job losses in Pennsylvania which they attributed to NAFTA and the South Korea trade agreement.

The numbers are packaged to be as scary as possible to voters, but any economist will tell you that statistics can be used to spin many different compelling stories. And there is more than one factor at work here.

Jobs in U.S. manufacturing have been declining since long before NAFTA or the South Korea agreement. As China, India, and other developing nations started to grow and became more competitive, we started losing ground in certain sectors.

However, even the sectors which did not suffer production losses, showed a decrease in their employment. The major factor behind this is technology. As we adopt technology throughout the production process (some prefer the word “automation”), the demand for labor in some sectors goes down. Look no further than your neighborhood retail stores, where checkout counters are being replaced one-by-one with self-checkout options.

In fact, the 2016 Economic Report of the President has a special section on the possible effects of automation on workers. Their calculations indicate that lower wage jobs, such as those paying less than 20 dollars per hour, are more likely to be automated (with a probability of automation of more than 80 percent).

“Rather than pointing our fingers at foreigners for the sad state of our economy and blaming trade, maybe it is time to ask where did we go wrong?”
Whether or not there is trade, experts expect this automation process to pick up pace. However, you do not hear either of the candidates discussing this trend, maybe because it is not juicy enough.

Furthermore, there is one important gain from trade that everyone in politics loves to ignore: lower prices for consumers. It is probably easy to ignore this important impact since the gains to each individual from trade are relatively small compared to someone who loses his or her job and livelihood. But they add up.

Many of us enjoy the increased product variety and lower prices without noticing that it could be the result of free trade. A 2014 study by Fajgelbaum and Khandelwal notes that a large share of this price benefit accrues to lower income consumers, since they spend a larger share of their disposable income on heavily traded food and clothing items.

They estimate that consumers in the bottom 10th percentile of the income distribution would lose more than half of their purchasing power if U.S. pulled out from international trade. It is interesting that this fact is not part of the discussion when there is an increasing focus on growing income inequality in U.S. politics.

It is vital to evaluate trade agreements not only based on the losses, but also on gains whether they accrue to exporting industries or consumers. Most economists agree that the benefits from free trade outweigh any resulting job loss and that appropriate domestic policies such as trade adjustment assistance can help shore up any domestic labor impact.

This could take various forms such as retraining workers for other booming industries or financial assistance. In addition, as trade agreements were adopted, overall job growth in the U.S. has trended upward over time, only slipping back during recessions. Furthermore, total U.S. manufacturing output has increased in recent decades even though it employs fewer workers.

Rather than pointing our fingers at foreigners for the sad state of our economy and blaming trade, maybe it is time to ask where did we go wrong? The list is not short: our outdated tax code, increasing regulatory burden, crumbling infrastructure, and deteriorating education system are just a few culprits that have contributed to our sluggish economy and slow job growth.

Our decreasing competitiveness in the international arena is most likely due to not keeping up with an evolving global economy. To address these major issues, we need strong leadership that is willing to break the growing partisanship in the Congress and make tough decisions. Kicking the can down the road will become harder and harder as the cost of inaction balloons.

Whether or not there is a vote on the Trans Pacific Partnership (TPP) during the lame duck session is still uncertain. Both presidential candidates have voiced their opposition to the agreement and that is shortsighted. Despite the noise made by trade opponents, 60 percent of Americans supports the passage of TPP, according to the Chicago Council on Global Affairs.

We can continue lowering the trade piñata for everyone to whack and claim that “we cannot compete.” Or we can reach for the higher goal, put our fiscal house in order, approve TPP, and lead the pack in Asia, the fastest growing region of the world.

Commentary by Pinar Çebi Wilber, Ph.D., a senior economist at the American Council for Capital Formation, a nonprofit organization advocating tax, energy and regulatory policies that facilitate saving and investment, economic growth and job creation. Follow her on Twitter @Drcebiwilber.

The real reason you’re not getting a pay raise