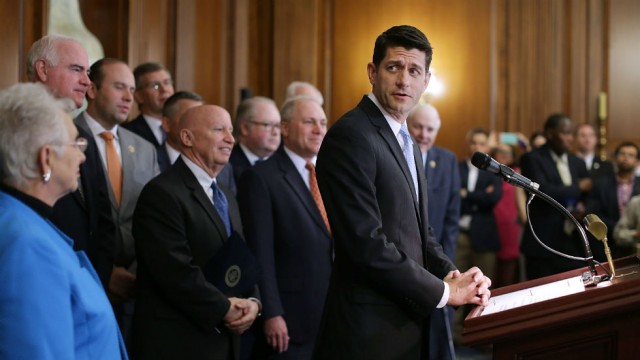 Perhaps it should come as no surprise that after 30 years of growing frustration with a broken tax code, the corporate world has launched a full-court press of messaging and advocacy before tax reform is even out of the starting gate.

A few decades laboring under the heavy burdens of the U.S. tax code is enough to make anyone eager, after all. And corporate America, for the first time since the Reagan administration, sees a genuine opportunity to enact comprehensive tax reform that can begin to address the disadvantages that they have faced relative to their international competitors for so long.

The outlet for this eagerness has thus far taken the shape of intense advocacy in favor of, or in opposition to, various pillars of potential tax reform legislation. That’s well and good — the input of the business community is essential to effective reform because its members know better than anyone else how the arcane, granular and technical elements of tax policy will function in the real world.

The problem is that at this early stage, there are no arcane, granular or technical elements of tax reform to examine — at least not in any meaningful sense. Less than a month into a new administration, we remain firmly within the realm of hypotheticals, concepts and broad strokes.

The policy vehicle for tax reform, in other words, isn’t airborne yet. It’s not on the runway. It hasn’t made it to the airport, or through the assembly line for that matter. It’s a blueprint. And while it may be an essential step in the legislative process, it’s far from a final product.
We have a long way to go in this debate, and it’s important that the business and advocacy communities understand that reality before they entrench themselves too firmly into a position for or against any of the blueprint’s foundational ideas.

Stakeholders can and should engage in the policy development process. But to capitalize on the reform opportunity at hand, they should also keep some powder dry for the debate of substance still to come.

For a case study of this dynamic at work, look no further than the already radioactive discourse surrounding border adjustability, a cornerstone of the House Republican tax plan. The plan would tax American imports while exempting exports in hopes of remedying the myriad challenges that American companies, and the economy at large, face at the hands of the current tax code.

Its supporters expect the plan to create jobs, strengthen the dollar and lessen or eliminate the tax-driven issues that have led so many organizations to send jobs, production and even corporate headquarters overseas.

They also expect it to raise revenue, and so do independent analysts: $1 trillion over 10 years, according to the Tax Foundation. And while it’s premature to begin doling out revenue offsets, there’s no question that revenue generation at that scale will be essential to achieving the other goals of tax reform — especially rate reduction both for businesses and individuals.

Despite these hoped-for benefits, its opponents rank border adjustability somewhere between the bubonic plague and New Coke in terms of its merit within the tax reform debate. They fear that higher import prices will place businesses that rely on foreign goods — especially retailers like Wal-Mart and Dollar General — at a disadvantage, undoing the advantages that have been gained for so long by looking to cheaper foreign markets for their inputs.

Supporters, for what it’s worth, would counter that removing the incentive to send business overseas is the entire point of border adjustment.

Neither side can be blamed for being assertive about they want to see out of tax reform. But the intensity of this early debate underscores the need to remember that we are, again, still making our way to the starting line of this marathon.

Isn’t it a little bit early to break out into a dead sprint — at least if we hope to finish?

Stakeholders on all sides of this debate would do well to dial back the intensity and acrimony, and to instead engage in a more collaborative manner in hopes of ensuring that the package produced by the House GOP is as good as it can be.

Let’s work together to avoid blowing up this year’s tax reform push before it’s off the ground.

There will be plenty of time to “go nuclear” once reform legislation is written and moving through Congress, after all.

Mark Bloomfield is the president and CEO of the American Council for Capital Formation, a pro-growth economic think tank. For more than four decades, Bloomfield has been a leading advocate in Washington for pro-growth approaches to U.S. economic policy; in particular, tax, energy, environmental, regulatory and trade issues.