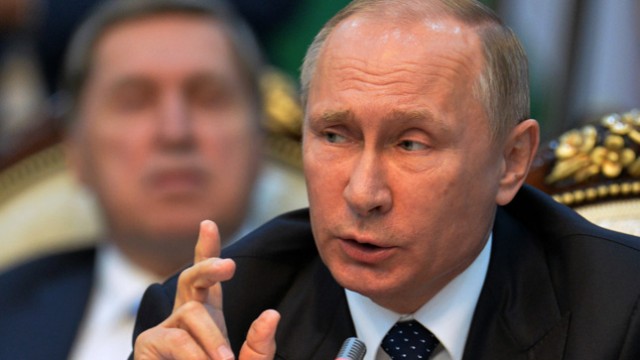 The House will soon vote on economic sanctions against Russia. In its current form, the sanctions bill is more likely to make Vladimir Putin grin than grimace.
One provision in particular, passed by the Senate last month, would undermine U.S. competitiveness, endangering millions of jobs throughout the country — a consequence that Russia would no doubt welcome. Senate changes to what is known as “Directive 4” would give a leg up to Russian oil and gas firms in their increasingly fierce competition with American companies.

Washington must ensure that any sanctions against Russia hit their intended target — and don’t backfire on American workers.
The provision in question would expand the current prohibition against American energy firms engaging in oil and gas projects on Russian soil. That rule, nominally observed by the European Union, has been on the books since 2014.

Under changes to Directive 4 in the Senate bill, U.S. companies would be banned not just from drilling in Russia, but from participating in any energy venture that involves Russian firms — no matter where that venture is located.

In the domain of deepwater drilling, companies from different countries — including, in some cases, Russia — routinely collaborate to develop a given oil or gas field. The proposed reform would close off an untold number of potential deepwater projects to American companies, while leaving Russian firms free to participate.

That’s not a sanction against Russia; it’s a sanction against the United States. And it would put countless jobs at risk, both in the oil and gas industry and among the complex network of contractors, service-providers, and other businesses that work closely with energy firms.

All told, the oil and gas industry supports more than 9.8 million jobs nationwide. In Maryland alone, over 75,000 workers at more than 90 businesses across the state owe their employment in some way to the oil and gas sector. The same is true of over 141,000 Virginia workers.

The sector supports almost 2 percent of Maryland’s labor income, and 2.5 percent of Virginia’s.

Local state economies — and not Russian oil and gas companies — are the most likely to suffer if the proposed rule takes effect.

As for Russia, the expansion of Directive 4 would actually empower that nation’s energy industry to decide where and when American companies could participate in international oil and gas projects. If the Russian energy sector wanted to lock America out of the global market entirely, it could involve itself at least nominally in every major exploration project around the globe.

Congress has every right to impose economic sanctions to protect America’s geopolitical interests. But any sanctions that expand Directive 4 would strengthen the Putin regime at the expense of American workers.