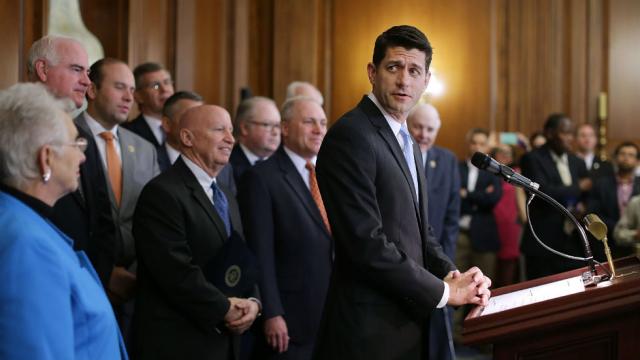 A word of caution to anyone preparing to throw dirt on the prospect of tax reform this year: Don’t break out your shovels just yet. Tax reform is still alive because of a strategic decision by the White House and Republican congressional leaders.

The path to passing comprehensive tax reform is becoming clearer. Step one was for the “Big Six” — the White House, Treasury secretary, House speaker, Senate majority leader and the chairmen of the congressional tax writing committees — to get Republicans on one page.

This was achieved in their joint statement released in July with more detailed consensus principles expected the week of September 25. With unified principles in hand, advancing tax reform should avoid the pitfalls and intraparty fractures that plagued repealing ObamaCare.

While it might be hard to fathom in today’s populist and often divisive climate that broad agreement can be reached on an issue as politically-charged as tax reform, there is nonetheless consensus among most Republicans, including the key players.

Permanent, comprehensive tax reform is a major part of fixing the American economy. After all, the U.S. tax rate on businesses is the fourth-highest rate in the world, placing American firms at a disadvantage against their global competitors.

It’s also long overdue. House Speaker Paul Ryan (R-Wis.) recently illustrated this point, commenting that the last time Congress fixed the tax code was the same year he got his first driver’s license. Ryan’s anecdote would be funnier if it weren’t horrifyingly true.

The trillion dollar question is how to pay for making taxes competitive.

The consensus plan to make tax reform permanent includes moving the U.S. to “a system that encourages American companies to bring back jobs and profits trapped overseas.” In other words, repatriated earnings would help offset any anticipated revenue losses.

The “Big Six” proposal aims to reform international tax treatment for U.S. businesses and prevent inversions so that American companies are no longer tempted to move abroad. As ex-Treasury Secretary George Shultz and other former Treasury officials stated, “Inversions are a symptom. The disease is America’s anomalous international tax code.”

The path to permanent and long-lasting tax reform will involve at least three steps. Step one has largely been accomplished. Step two, the passage of a budget that paves the way for debate on tax reform, is critical. That’s why the White House recently dispatched Treasury Secretary Steven Mnuchin and National Economic Council Director Gary Cohn to meet with key congressional leaders.

Given the recent ruling by the Senate parliamentarian that temporary budget rules will expire after September 30, many Republicans are worried that the absence of a new budget could derail tax reform efforts this year.

As a result, Mnuchin and Cohn’s trip to Capitol Hill likely signaled the beginning of a full court press toward budget passage. After all, no budget means Republicans can’t count on reconciliation to pass tax reform. For a president and a Congress eager to deliver a key victory, the passage of a budget is an obstacle that simply must be cleared.

The fate of tax reform is inextricably linked to the reconciliation process — the path Majority Leader Mitch McConnell (R-Ky.) indicated the Senate will pursue. The Republican majority needs 51 votes, instead of 60, to pass tax reform through reconciliation.

Factoring in the possibility that some Republicans could defect, President Trump has attempted to win over Democrats. Successfully doing so would demonstrate bipartisanship and would be politically effective.

In the coming weeks, he will travel to up to 13 states — many where a Democratic senator is up for re-election and where the president won big. There won’t be a vote to spare and Trump’s objective makes it more possible to get 51 votes in the case of Republican defections.

With a new budget in hand and potential Democratic support, Step three on the path to comprehensive tax reform will eventually be a fait accompli when Trump signs the “The Big Six Tax Reform Act of 2017” into law.

There is precedent for a bumpy road to tax reform. The Tax Reform Act of 1986 was presumed dead just before Senate Finance Committee Chairman Bob Packwood (R-Ore.) had a legendary “two-pitcher lunch” at Washington’s Irish Times with his staff.

It was the catalyst that made reform happen. This year, it could be midnight oil discussions by the Big Six that trigger a landslide of momentum for tax reform.

The U.S. needs tax reform that is permanent and comprehensive. Short-term tax cuts won’t allow corporations and entrepreneurs to plan far enough ahead for business projections.

The sure footing that American businesses so desperately need to form capital and generate growth requires a long game and an enduring vision by our nation’s leaders. That won’t happen unless Congress comes together first to pass a budget. It is critical that lawmakers discharge their duty and get that job done quickly.

Mark A. Bloomfield is the president and CEO of the American Council for Capital Formation, a free-market, pro-business think tank.