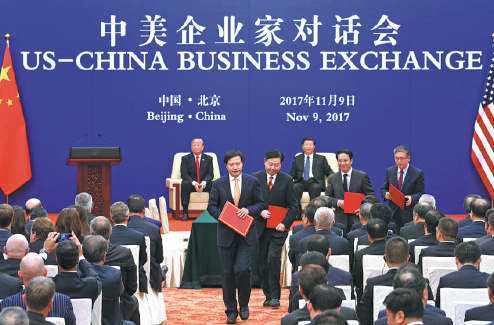 Chinese and Alaskan officials signed a five-party, $43-billion joint development agreement for the Alaska LNG project on Nov. 8 in Beijing. US President Donald Trump and Chinese President Xi Jinping were present for the signing ceremony at the Great Hall of the People, where other deals between the two countries were announced.

“Because Alaskans need well-paying jobs and affordable energy to power our homes, schools, and businesses, this Alaska LNG project is critical,” Gov. Bill Walker (I) said as he signed the agreement. “The gas line is key to building a stronger Alaska.” The historic signing is the most significant step toward finally monetizing Alaska’s vast natural gas resources, Walker said.

Officials from two Washington organizations agreed that the announcement was important but emphasized that more work lies ahead for the parties involved.

“It’s a positive sign from the initial work that the Commerce Department did earlier this year to include LNG in trade with China. That involved treating China no differently than any other non-free trade agreement (FTA) country,” said Charlie Riedl, executive director at the Center for Liquefied Natural Gas.

“This looks more like an understanding that an actual agreement, and there’s still more to do. But it shows that the Chinese are interested in US LNG,” he told OGJ.

Margo Thorning, senior economic policy advisor at the American Council for Capital Formation, said the deal potentially is a big plus for the state’s economy. “Alaska’s sharp decline in oil production over the last 2 decades has contributed to its large budget deficits and high unemployment rate—currently 7.2% compared with 4.1% for the US,” she noted.

“If the gas pipeline is built and the LNG export infrastructure is put in place, it will be a much needed boost for the slumping Alaskan economy,” Thorning said.

US Sec. of Commerce Wilbur Ross said the Alaska LNG deal was one of many totaling a $250 billion between US businesses and Chinese entities.