Home ACCF Scholars A debt crisis is on the horizon 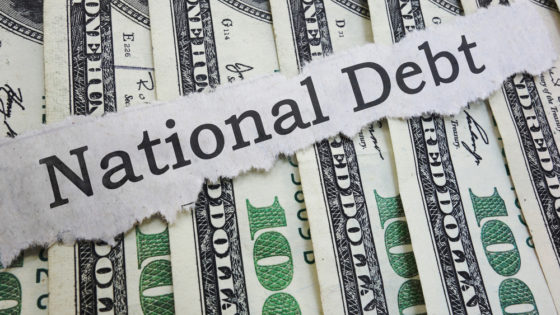 We live in a time of extraordinary promise. Breakthroughs in artificial intelligence, 3D manufacturing, medical science and other areas have the potential to dramatically raise living standards in coming decades. But a major obstacle stands squarely in the way of this promise: high and sharply rising government debt.

For years, economists have warned of major increases in future public debt burdens. That future is on our doorstep. From this point forward, even if economic growth continues uninterrupted, current tax and spending patterns imply that annual deficits will steadily increase, approaching the $1 trillion mark in two years and steadily rising thereafter as far as the eye can see.

Unless Congress acts to reduce federal budget deficits, the outstanding public debt will reach $20 trillion a scant five years from now, up from its current level of $15 trillion. That amounts to almost a quarter of million dollars for a family of four, more than twice the median household wealth.

This string of perpetually rising trillion-dollar-plus deficits is unprecedented in U.S. history.

In recent months, we have seen an inevitable rise in interest rates from their low levels of recent years. Rising interest rates and increasing deficits threaten to build upon each other to send public debt spiraling upward even faster. When treasury debt holders start to doubt our government’s ability to repay, or to attract future lenders, they will demand higher interest rates to compensate for the risk. If current spending and tax policy continue unaltered, higher interest costs will have to be financed by even more debt. More borrowing puts more upward pressure on interest rates, and the spiral continues.

If, for example, interest rates were to rise to 5 percent, instead of the Trump administration’s prediction of just under 3.5 percent, the interest cost alone on the projected $20 trillion of public debt would total $1 trillion per year. More than half of all personal income taxes would be needed to pay bondholders. Such high interest payments would crowd out financing of needed expenditures to restore our depleted national defense budget, our domestic infrastructure and other critical government activities.

Unchecked, such a debt spiral raises the specter of a crisis. Some may think that such concerns are overblown, as there is no current evidence in financial futures markets that a crisis is on the horizon. But a debt crisis does not come slowly and visibly like a rising tide. It comes without warning, like an earthquake, as short-term bondholders attempt to escape fiscal carnage. Only in hindsight are we able to see the stresses building and bemoan that we did not act. While some insulation flows from the dollar’s role as the global reserve currency, that is neither sufficient nor immutable, and relies on faith in the United States’ eventual fiscal probity.

As is well-known, our deficit and debt problems stem from sharply rising entitlement spending. Without congressional action, the combination of the automatic spending increase per beneficiary provisions of these programs and the growth in entitlement program recipients as the population ages will cause entitlement spending to continue to rise far faster than U.S. national income and tax revenue.

To address the debt problem, Congress must reform and restrain the growth of entitlement programs and adopt further pro-growth tax and regulatory policies. The recently enacted corporate-tax-reform plan is a good first step, as it sharply increases the incentive to invest and grow businesses, which will increase incomes. The revenue loss, which amounts to about 0.4 percent of gross-domestic product in 2025, is not by itself a budget buster, considering both the offsetting revenue reflow from higher incomes and the far larger long-run entitlement explosion. Moreover, over the next decade, the tax plan maintains or increases the federal tax claim on GDP compared with recent levels.

Taxes alone cannot solve our budget problem. Funding programs as they are currently structured will require high taxes for all income levels, taxes that would sharply reduce economic opportunity and growth, which in turn will make funding entitlements that much harder.

If Congress acts now, it can avoid a fiscal collapse while continuing to provide help to people who need it. If Congress waits for a crisis — which may come when the United States needs suddenly to borrow significantly to address a financial meltdown, recession or war — the result will be fiscal and economic chaos, as well as painfully sharp cuts to programs that people rely on.

It is time for action. Fixing our fiscal problems is far easier now than it will be in the heart of a crisis. And if we cannot fix our problems now, in a time of peace and prosperity, just when can we do so?