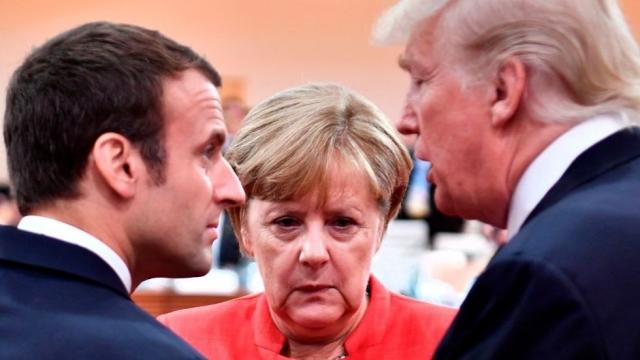 The White House is having a busy week with visits by French President Emmanuel Macron and German Chancellor Angela Merkel. The list of issues that could be brought to the table is not short, ranging from trade to defense.

It will be interesting to see whether the two European leaders will present a united agenda and how the personal relationships, good or bad, between these three counterparts will shape the discussions.

It is not a secret that Presidents Trump’s and Macron’s relationship has evolved over time. Recently, some commentators have dubbed it a “bromance.” France’s immediate support for the U.S. strike against Syria helped fortify the close relationship between the two leaders.

While the news coming out on Macron’s visit indicates a positive tone, we all know President Trump likes to keep us on our toes.

President Macron’s heavy emphasis on the Iran nuclear deal indicates that this is a priority for the French government as the May 12 deadline approaches.

The agreement, which was struck between Iran and six major countries (the U.S., U.K., Russia, France, China and Germany), lifted crippling trade sanctions in exchange for Iran’s promise to curb its nuclear weapons program.

President Trump, who has called the deal “one of the worst and most one-sided transactions the United States has ever entered into,” signaled after a tete-a-tete with Macron that he may be open to a new deal.

If the U.S. stays in the deal, it could help ease some of the tensions with our European allies, as well as strengthen the U.S. hand in discussions with North Korea. The current deal was a major effort and took time to finalize.

It is viewed as a step up compared to a no-deal approach of many policymakers around the world. Pulling out of the deal ahead of the meeting with North Korea could make the U.S. appear to be an unreliable negotiating partner, and it could make Kim Jong Un less likely to give up his nuclear ambitions.

Trade tensions have not seemed to play a big role in the Macron-Trump discussions, probably due to the small trade deficit the U.S. has with France. According to the U.S. Bureau of Economic Analysis, in 2017 the U.S. had a trade deficit of $14 billion with France, compared to an overall $101 billion trade deficit with the EU.

In fact, Macron was adamant about using President Trump’s jargon to make the point “When you look at the trade issues between our two countries, they are balanced. There is no unfair trade there.”

But when Chancellor Merkel visits White House Friday, trade issues are likely to take center stage. The ongoing tension between the two leaders will probably make this discussion more difficult. The large trade surplus of Germany with the U.S., $68 billion in 2017 to be specific, is already on President Trump’s radar.

In a 2017 tweet, the president targeted Germany’s large surplus and lack of financial contribution to North Atlantic Treaty Organization (NATO) and ended his tweet saying, “This will change.”

At this point, Germany and France could have different views on how to handle the trade tensions between the U.S. and the EU. According to some reports, Germany is ready to offer concessions on tariffs for a series of products, including cars, machinery, foodstuffs and pharmaceuticals, to avoid a trade war with the U.S.

However, France does not want to give in to U.S. demands and would take a different route, such as pressuring China to correct its overcapacity. Friday’s meeting between Trump and Merkel should give us a clearer picture of what the E.U. unified trade agenda will be.

While other issues will probably be discussed in these meetings, the common theme will likely revolve around trying to convince President Trump to work with European allies to solve global problems rather than alienating them.

An ongoing U.S. unilateral approach could get old quickly and could create a backlash that could ultimately undermine the U.S. position as a world leader.