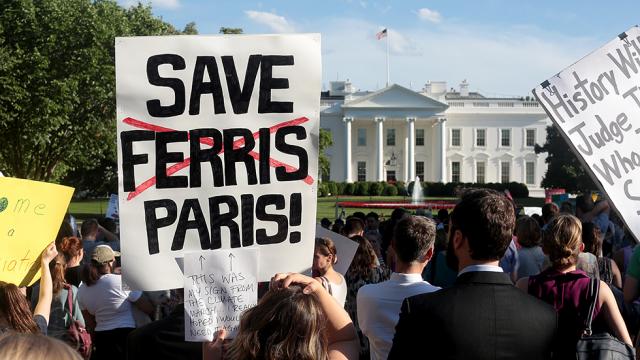 Friday marks the one-year anniversary of President Donald Trump’s speech announcing his decision to withdraw from the Paris Agreement. The audience of a few hundred, composed largely of conservatives, waited eagerly in the sunny Rose Garden to hear the president’s remarks. They knew what was coming — or at least they thought they did.

I sat in the second row, directly behind my two bosses — National Economic Council Director Gary Cohn and National Security Adviser H.R. McMaster, both of whom had pushed vigorously until the very last moment to keep the United States in the agreement.

The president, however, had a campaign promise to keep. “In order to fulfill my solemn duty to protect America and its citizens, the United States will withdraw from the Paris climate accord,” he declared.

As expected, much of the audience exploded into loud applause.

But then the president said something unpredicted: “…But begin negotiations to reenter either the Paris accord or a really entirely new transaction on terms that are fair to the United States.”

Silence fell upon those gathered, followed by whispers and murmurs. “What was that?,” I heard someone ask. The bewildered crowd had failed to anticipate that the president’s instinct to strike a better deal than President Obama on any topic might keep hope alive for U.S. participation.

Over the past year, the president has frequently expressed his willingness to “go back” into the agreement with the right deal, usually in the presence of foreign leaders. As the president’s former advisor on international environment, I’m often asked what would entice him to follow through, considering that formal U.S. withdrawal cannot happen before November 2020.

In short, the answer is politics. If the president believes that “renegotiating” a better deal produces political benefits that exceed the costs, he may very well change his mind. Personally, I don’t see any political advantage for the president to “re-enter” Paris over the next two years, but for the following three reasons, I am bullish on the prospect in the final half of 2020:

First and most obvious, the Democratic presidential nominee will make Paris re-entry a campaign issue, with the likely backing of most voters — seven out of 10, according to one national poll from last year.

Second, the United States will host the G7 Summit — composed of leaders from Canada, France, Germany, Italy, Japan and the U.K. — that summer. The Trump administration will be searching for political victories to showcase at the Republican National Convention, which is likely to occur only a few weeks later.

Third, putting aside the rhetoric that the Paris Agreement was a bad deal, the Obama administration negotiated a very flexible framework that provides ample room for the type of public relations coup that President Trump would be seeking.

Using the G7 Summit venue, the president could simply unilaterally submit a new pledge under Paris — one that does no harm to the U.S. economy.  He could then claim that he had renegotiated the agreement with foreign leaders, securing a much better deal than President Obama.

Re-entering the Paris Agreement would find two camps of critics: Democrats who would cry foul, arguing that the president didn’t renegotiate anything, and conservatives who are ideologically opposed to climate action.

Democrats would claim that Paris Agreement pledges are nationally-determined, and they would be correct: No other country can force the United States to do anything more than what it is willing to do, and there are no real penalties if the U.S. pledge isn’t met.

In re-entering the agreement, President Trump could define a narrative that would be very difficult for his opponents to overcome. The emergence of the president from G7 talks with Paris re-entry as a deliverable would dominate world headlines.

As we saw with the Rose Garden speech, only a limited number of outlets covered the more nuanced message that included the possibility of staying in the Paris Agreement, and few would highlight the argument that an actual renegotiation did not occur at the G7.

Most Americans would be very pleased that President Trump had reversed course and struck a better deal than President Obama, and there’s some truth to this.

While a renegotiation would not have occurred in the traditional sense, President Trump would have formally canceled the burdensome pledge submitted by the previous administration — one that would have required new regulations across U.S. manufacturing.

In the end, the decision is in the president’s hands, but I place the odds of greater than 60-40 that President Trump, the dealmaker, scores a Paris political victory shortly before the 2020 election, thanks in large part to the flexibility that his predecessor gave him.