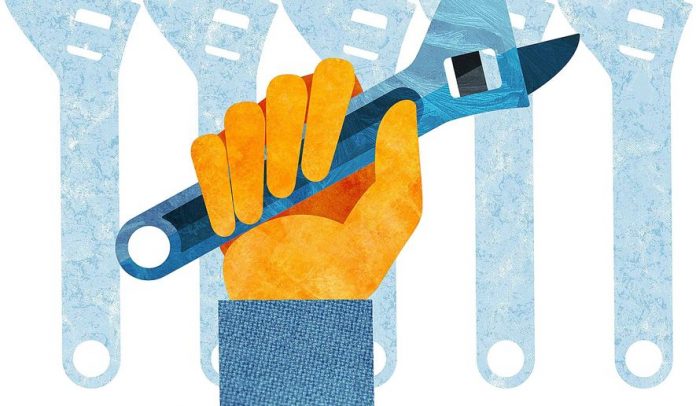 Will there be too few or too many jobs in the future? We are told as a result of the artificial intelligence (AI) revolution with endless robots, autonomous vehicles, etc. that there will be far fewer jobs. Yet last week, despite record levels of automation, the Department of Labor announced that the country had reached the point where there were more jobs available than people seeking work.
At the time of the American Revolution, three-quarters of all Americans worked on farms; now it is 1.5 percent. A century ago, in 1918, despite a much smaller population, there were four times as many Americans working on farms than there are today, yet they each produced only about one-fifteenth as much food as today’s farmer.
Where did all of the farmers go? The first farm machines, like the reaper, were developed in the early 1800s. But it was not until the 1850s that entrepreneurs like Cyrus McCormick built the first mass-production farm machinery companies. During the industrial revolution, there were many commentators decrying how the new machines would destroy all of the jobs. It didn’t happen — many more new jobs were created. (There was one big loser, and that was the draft horse — which stopped being bred.)
A big source of employment outside the home for women in the first half of the 20th century was being a telephone operator. As the telephone became widespread, there was a fear that the country could not produce enough telephone operators; but, as automated exchanges were developed, there was an opposite fear that there would be too few jobs for women. The fearmongers somehow were unable to envision that within a few decades there would be more women graduating from medical and law schools than men.
In a recent Wall Street Journal article, Martin Feldstein, former chairman of the Council of Economic Advisers under President Reagan, wrote: “The day is coming, experts tell us, when artificial intelligence and robotics will massively disrupt the labor market. Autonomous vehicles will put 3.5 million truck drivers at risk of losing their jobs. Checkout machines may replace 3.4 million cashiers. That is only the beginning of the long list of jobs that will be destroyed by technological change.”
In fact, labor market disruption is constant. Fifty years ago almost no one was employed in Information Technology, and few were as recently as 30 years ago. Now, broadly defined, about 7 million people are IT workers.
It is hard to imagine any future innovation that could destroy almost three-quarters of all the jobs as the farming revolution did — the result of the combination of much better seeds, fertilizers, pesticides, farm mechanization and greatly improved farm management.
Internet commerce has already destroyed millions of relatively low-skill retail jobs, but even so there is full employment in the country. Where did all of these people go? They are obviously working at something. Remember Kodak, Fuji, Nikon and all of the other household names in the camera, film and photofinishing industry? Twenty years ago, who could have imagined that Apple would be the U.S.’ largest camera company and the world’s most profitable maker of telephones?
Every month, Apple, Amazon, Microsoft, etc. go out and kill entire existing industries and large companies with tens of thousands of employees. Yet again, we have full employment. So where did all of the workers in the destroyed companies go?
Up to 50 years ago, few people had seen much of the world. The invention of the Boeing 747 aircraft changed everything and made the entire planet a playpen for even middle-class people and now even college students. The modern jetliner has created hundreds of millions of jobs in the hospitality industry worldwide. Real plans are being made by serious people to develop a tourist industry for the moon and even Mars. How many jobs will that create?
Up to relatively recent times, you could ask someone what they did, and they would give you an answer you could understand — e.g. “I sell books in a bookstore.” Now people give answers that accurately reflect their job title (e.g. configuration manager), yet often we have no sense of what they just said.
I am willing to bet that in 50 years there will still be plenty of jobs for everyone — just different jobs than most people have now. You may be thinking, that is a safe bet because Richard Rahn will be dead in 50 years. Not necessarily. Many people are working on curing the aging problem — and I intend to be a customer because these folks need a job.