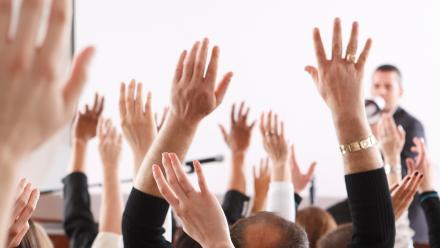 Proxy-advisory firms, under scrutiny in Washington over the weight given to their corporate-policy guidance, aren’t giving companies enough time to respond to voting recommendations that oppose management’s plans, a report released Monday contends.

And investors that typically follow the firms’ suggestions on matters from executive pay to environmental issues aren’t always analyzing them closely before before voting, according to the study, which was commissioned by the non-profit American Council for Capital Formation. Advisers for the group, which receives most of its funding from outside contributions, include former Democratic Sens. Max Baucus and Joe Lieberman, former Secretary of State George Shultz, and Mark Weinberger, chief executive officer of Ernst & Young.

“There is a major point of failure in our current proxy voting system, with serious ramifications for America’s public companies and the retail investors who are the beneficial owners of their stock,” author Frank Placenti, who leads the governance practice at law firm Squire Patton Boggs, said in an emailed statement. The findings provide a window into a subject that the Securities and Exchange Commission will review at a November roundtable on shareholder proxy votes.

Corporate critics charge that the two major firms, Glass Lewis and Institutional Shareholder Services Inc., operate with little oversight and don’t always provide an adequate rationale for how they reach recommendations on shareholder votes. These votes are typically held once a year and are designed to give the company’s ultimate owners regular input into management.

Given the prominence of ISS and Glass Lewis, investors sometimes vote for whatever position the two firms advocate, a practice referred to as “robo-voting.” In the 2017 proxy season, the study found that 19.3 percent of the total vote on a proposal occurred in the three days following an adverse recommendation from ISS, up from 15.3 percent in 2016.

The firms’ reports can also come with little notice, making it difficult for the publicly-traded companies affected to quickly make an opposing case to investors. Nearly 37 percent of respondents to the council’s survey said they were given no opportunity to respond to an adverse recommendation from ISS, while 84 percent said they received no advance notice of an upcoming critical report from Glass Lewis.

“Nearly 85 percent of companies that were given notice from ISS indicated they received less than 72 hours to respond,” the report states.

In the 2016, 2017 and part of the 2018 seasons, the report also found that 94 companies highlighted 139 errors in ISS or Glass Lewis voting recommendations, 49 of which the study labeled as “serious disputes.”

In May 2017, for example, ExxonMobil disputed recommendations from both ISS and Glass Lewis that investors back a proposal requiring a report on how climate change is affecting the oil company’s business. The Irving, Texas-based business said the two firms “both failed to acknowledge that the company already addressed a 2-degree Celsius” temperature-change scenario in its 2014 and 2016 disclosures.

“ExxonMobil has considered the impact of this 2-degree Celsius scenario on the ‘demand for the company’s products,’ concluding that even in this scenario, that the world will continue to require significant quantities of hydrocarbons for which ExxonMobil is well situated to compete,” the company wrote in the filing.

ISS blasted the report as misleading and compiled by “a corporate lobbying group and key backer of the Main Street Investors Coalition that is campaigning to hinder the rights of shareholders.”

“Institutional investors are not robots as suggested in the report. ISS’ clients are sophisticated institutional investors who owe a fiduciary duty to their plan beneficiaries,” Lorraine Kelly, head of governance solutions at ISS, said in a statement. “Despite the misleading assertions in this paper, ISS has strong fact-checking protocols and a lengthy track record for accuracy,”

The report looked at a relatively small data set — only 35 companies, predominately with market caps over $2 billion — and Placenti acknowledged that no “statistically significant conclusions” can be drawn from the results.

New York’s Pensions Should Focus On Financial Returns — Not Politics