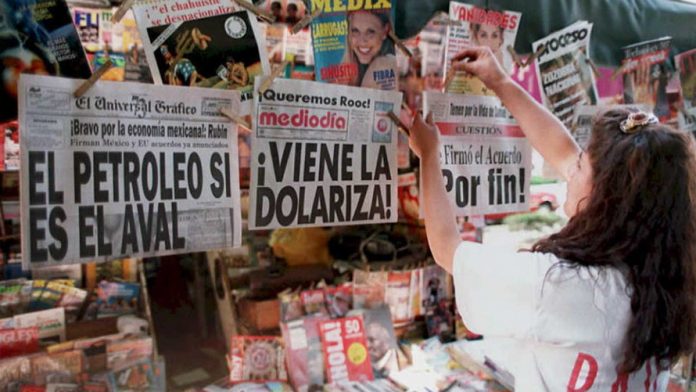 Vintage clothing and furniture have great appeal and value for consumers, but when it comes to international trade, retro policies can be a horrible look for today’s complicated global economy.

Yet the U.S. is part of a worldwide trend of resurrecting a failed trade policy used heavily by developing countries like Mexico and India that focused on self-sufficiency after World War II: Import-substituting industrialization (ISI).

The Trump administration’s focus on bringing back manufacturing jobs is as likely to be successful and lasting as the historical data tell us. For many Latin American countries in the early 1970s, the economic data indicates that not only had industrial growth slowed, but also Latin America’s rapidly growing urban population was having difficult time finding industrial jobs. This should be of concern to today’s unemployed American manufacturing workers.

Under the shadow of global economic and political problems during the 1940s, many developing economies adopted ISI as a means to grow their stagnating or shrinking incomes. They believed the holy grail for achieving the much-desired economic growth rested on creating a manufacturing base to replace imports of manufactured goods. They used a variety of policies to stimulate manufacturing, but the main policy instrument was increased tariffs.

Selling ISI policies to their constituents was not difficult. Politicians claimed that the world economy was rigged against new entrants, and industrialized economies would never let them reach the political and economic strength they desired in the international arena.

Two countries that followed ISI polices were Mexico and India. Starting after World War II, Mexico heavily depended on ISI to protect and promote its national industries. This was also accompanied by other nationalist policies, such as nationalization of its natural resources and railroad companies. Given that throughout the 1950s and 1960s Mexican industry became increasingly self-sufficient and achieved good growth rates, the protectionism seemed to be successful.

However, by the late 1970s, these policies began to backfire, ultimately leading to the debt crisis in 1982. Domestic industries that had enjoyed protection over the years suddenly found themselves to be uncompetitive, with low productivity numbers. This outcome was enough to change Mexican trade policy, with liberalization replacing protectionism and the country moving toward export-led growth. Since then, Mexico experienced modest growth, but according to a working paper from the Federal Reserve of Minneapolis “would have grown even more rapidly if trade and investment had been liberalized sooner.”

After its independence in 1947, India followed a similar path. The country aimed to produce everything domestically rather than importing, even if it cost more and was of lower quality. The Indian economy was also characterized by overly burdensome regulations, high taxes, and inefficient state-owned enterprises. During this period, India’s rate of growth reflected the damage of these policies, being only 1 percentage point higher than population growth.

Like Mexico, India recognized the unsustainability of its policies and changed direction. 1980s and 1990s witnessed big policy changes, with trade liberalization being a key component of the reforms in the 1990s. And according to the World Bank, India’s economic story since the 1990s is remarkably stable and resilient, with growth trending at 7.5%.

Now we are witnessing a form of these failed policies in the U.S. with the goal of revitalizing the manufacturing sector. President Trump and his team believes that lifting U.S. growth and increasing employment depend on creating a healthy manufacturing base. The administration began by trying to revive the U.S. steel and aluminum sector by imposing tariffs on the basis of national security concerns. Then came changes in Nafta, primarily targeting the auto industry, and finally, tariffs imposed on China on a wide range of goods.

While these policies are not as extreme as the ones used by Mexico and India, according to some, they are already having a negative impact on the U.S. economy, offsetting part of the higher growth that was expected due to tax reform.

We will need more data to fully analyze the economic impact of the administration’s protectionist policies, but multiple studies indicate that these policies will have negative impacts. For example, one study by IMF and Berkeley economists showcased how tariff increases between 1963 and 2014 led to economic declines using data for 151 countries. Their study also shows that the effects on output and productivity tend to be magnified when tariffs rise during expansions for advanced economies, such as the case for the U.S.

Read: Look beyond the threat of steel tariffs to the 1.8 million jobs that could vanish if Nafta goes

In addition, these policies are not helping President Trump’s so-called yardstick for his trade policy success: the trade deficit. According to the most recent data by the Commerce Department, the trade deficit in goods and services reached $55.5 billion in October, a 10-year high. This result was not unexpected. As a recent paper from the National Bureau of Economic Research shows, “protectionism is not an effective tool for macroeconomic stimulus and/or to promote rebalancing of external accounts.”

It is never too late to turn the ship around and look for productive policies that could help the U.S. economy in real terms.

As President Reagan eloquently expressed his frustration with these vintage policies, “Instead of protectionism, we should call it destructionism. It destroys jobs, weakens our industries, harms exports, costs billions of dollars to consumers, and damages our overall economy.”

Pinar Çebi Wilber is an adjunct economics professor at Georgetown University and senior vice president and chief economist for the American Council for Capital Formation.