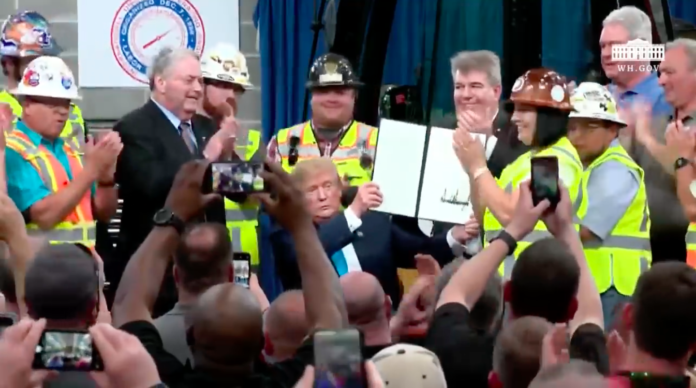 “A VALUABLE CONTRIBUTION TO THE NATION’S MANUFACTURING AND TRADE POLICYMAKING”

“Today, the President took an important step to strengthen the energy security of the United States and its allies and further economic prosperity. For years, state and local government opposition has hindered the development of much-needed infrastructure that would allow all Americans to benefit from affordable, abundant, and reliable energy. U.S. allies have also suffered, being forced to rely more on countries that often seek to use energy as a political weapon.”

“The President also sent a strong commitment to support economic development in the Appalachian Region, one of the poorest parts of America that has often been overlooked in the nation’s debate on income inequality. By identifying federal obstacles to investments in manufacturing, especially the petrochemical industry, this EO will be a valuable contribution to the nation’s manufacturing and trade policymaking, including discussions related to ethane exports.”

“The executive order reiterates the Department of Labor’s April 2018 guidance on ESG investments and makes clear that the administration intends to reverse a growing investment trend focused on non-economic factors, at the risk of diminished returns, to satisfy a political or social agenda. The president is clearly telling the investment community that their fiduciary duty is to focus on maximizing returns for all investors and to keep politics and social causes out of their investment decisions. As investors become more interested in an ever-growing list of ESG issues, the president’s policy will advance a standard of ‘objective materiality’ in the type of information that should be disclosed to investors.”