Home Events A Conversation with the New Democrat Coalition

Many Co-Chairs of task forces of The New Democrat Coalition were in attendance including:

Members of the media included:

Business executives from the breadth of the American economy joined the New Democrats for the off-the-record discussion. 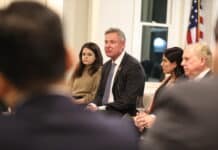 The Future of USMCA and Its Impact on the North American...