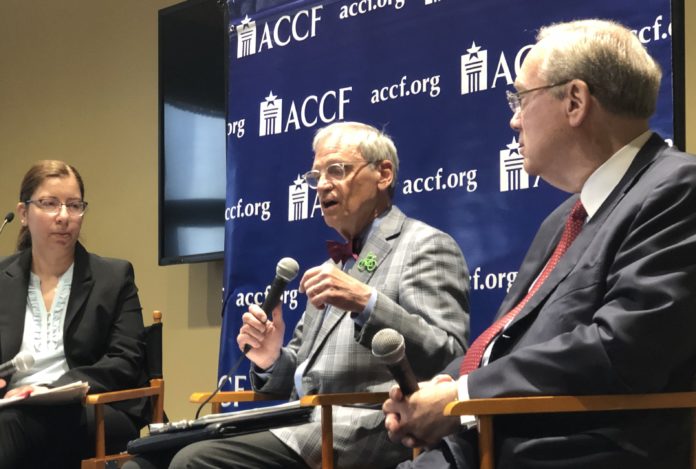 A senior House Democrat today expressed skepticism about the Trump administration’s hope for a vote on the U.S.-Mexico-Canada Agreement before the long August congressional recess.

“Not going to happen,” Rep. Earl Blumenauer (D-Ore.), chairman of the House Ways and Means Trade Subcommittee, said at an event hosted by the American Council for Capital Formation. “I think it’s very unlikely that something is going to happen before the August recess.”

Blumenauer also sits on a nine-member working group appointed by House Speaker Nancy Pelosi to meet with U.S. Trade Representative Robert Lighthizer to discuss concerns Democrats have about the labor, environment, pharmaceutical and enforcement provisions of the pact. The group met for the first time Wednesday night, although not with Lighthizer.

Blumenauer said he saw the working group as part of a larger Democratic process to “reset” U.S. trade policy and relations with the rest of the world after the turbulent first two-and-a-half years of the Trump administration.

“I hope this is an opportunity to reassess multilateral relationships that we have, everything from the Middle East to the Paris Accord and trade and reassert our commitment to that process,” Blumenauer said. “I see this as a start of that.”

Lighthizer, reflecting the administration’s desire for a quick trade victory, told the House Ways and Means Committee during a hearing on Wednesday that he could sit down with Democrats and solve each of their concerns in half of a day.

But Blumenauer said it would take more time for Democrats to work through the issues.

Democratic House Ways and Means members in recent months have sent Lighthizer four separate letters outlining their concerns in each of their priority areas in the USMCA.

“To this point, we haven’t received anything specific back,” Blumenauer said, adding that Lighthizer “would rather go back-and-forth” to work out a deal with Democrats.

Democrats are willing to try that approach, but want to make sure that each of the four sub-working groups have their concerns heard and addressed, Blumenauer said. There is a broad recognition that the agreement contains improvements on labor, but Democrats want to make sure reforms are actually implemented and enforced, he said.

In a separate interview with POLITICO, Blumenauer warned the administration not to try to force the agreement through Congress by submitting implementing legislation before Pelosi signals Democrats are ready to take up the bill.

The 2015 Trade Promotion Authority law requires Congress to vote on trade agreements within 90 days after the president submits them to Congress. But when former President George W. Bush tried to force a vote on a trade agreement with Colombia in 2008, Pelosi pushed through a House rule change to effectively block consideration of the deal.

“Our leadership has made clear that we would like to reach an agreement, but it requires what we have now to be improved,” Blumenauer said. “You’re not going to jam Speaker Pelosi or the House leadership. The Bush administration made a big mistake in terms of how they handled [the Colombia pact] and Nancy pulled the plug.”

Blumenauer said he also saw no chance that the Trump administration could defeat Pelosi’s efforts to change House rules by persuading Democrats who already support USMCA to vote against her.

“No, because what she is reflecting is a broad consensus of our members that we want to do it right,” Blumenauer said.