Home ACCF Scholars Yang vs. Warren: Who Has the Better Tax Plan? 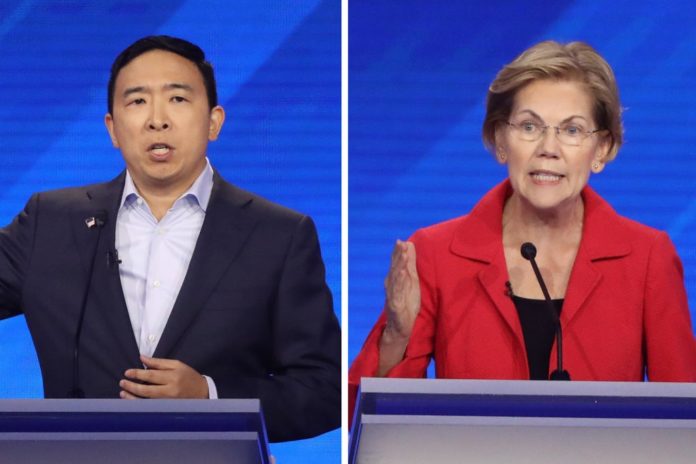 In the race for the Democratic presidential nomination, Senator Elizabeth Warren, of Massachusetts, and Andrew Yang, a former tech executive and entrepreneur, have both proposed bold plans for redistributing economic resources.
Their plans are as different as can be. Only Mr. Yang’s is practical.

Let’s start with some undeniable preliminaries. First, we live in a time of great economic inequality. Economists debate the roles of technology, trade and public policy in explaining this fact. But there is no doubt that disparities in income and wealth are far greater today than they were half a century ago.

Second, reasonable people can disagree about the role the government should play in addressing this inequality. The issue involves not just economics but also political philosophy. Like most people, I have opinions on this thorny question, but I won’t try to resolve it all here.

Instead, let’s consider a simpler question: Assume that one way or another, the government is going to pursue new policies to increase the equality of economic outcomes. Given that assumption, what is the best approach?

The political appeal is clear. Millions of Americans would benefit from this new public spending, while a small sliver of the population would bear the cost. According to a new paper by the University of California, Berkeley economists Emmanuel Saez and Gabriel Zucman, who helped to design the Warren plan, less than 0.1 percent of families would pay this tax.

Determining how much those families would owe, however, would be devilishly difficult. One problem is that many kinds of wealth have no market valuation.

Take Rihanna. She is fabulously wealthy, but to put a number on her wealth, the I.R.S. would have to also estimate the present value of her songs and their possible future royalties. Sometimes, such intangible assets are sold on markets — Michael Jackson once bought the rights to Beatles songs — but often there is no market price for them.

How popular will her songs be decades from now, and how much money will they bring in? Any estimate would be an educated guess, at best, yet it would have to be made.

A similar situation arises for many family businesses. When businesses are sold, accountants often attribute significant value to an intangible asset called good will. To assess a wealth tax, the I.R.S. would have to estimate the good will of every family business that hasn’t been sold.

Good will is hard to measure: It includes things like a business’s brand name, reputation, technology and its network of customers and contacts. Simple formulas that the I.R.S. might use to calculate this could result in substantial inequities and perhaps litigation.

More important, Senator Warren’s tax would likely raise less revenue than its proponents believe, as rich people would take actions to avoid it.

Giving money to adult children would also reduce a family’s tax liability. A married couple with three adult children could, by divorcing and gift-giving, exempt $250 million from the Warren tax.

In addition, rich folk planning to bequeath much of their wealth to charity would have an incentive to accelerate that giving during their lives, shrinking the wealth base subject to the Warren tax. And I could go on: There are countless ways for people with vast resources to avoid a complex tax like this one.

In short, what Senator Warren’s proposal enjoys in political appeal, it lacks in workability.

Mr. Yang has a very different approach. He proposes implementing a value-added tax and using the revenue to provide every American adult with a universal basic income of $1,000 per month, which he calls a “freedom dividend.”

It’s easy to see how the Yang proposal would work. Value-added taxes, which are essentially sales taxes, have proven remarkably efficient in many European countries. And the universality of the dividend would make it simple to administer.

The Yang proposal would not only be more workable than the Warren plan, but it would also target those who spend lavishly.

Consider two hypothetical C.E.O.s, each earning $10 million a year. Spendthrift Sam spends all his money living the high life. He drinks expensive wine, drives Ferraris and flies a private jet to extravagant vacations. Frugal Frank lives modestly, saving most of his earnings and accumulating a large nest egg. He plans to leave some of it to his children and grandchildren and the rest to charity.

Ask yourself: Who should pay higher taxes?

And if the goal is to raise substantial revenue from rich taxpayers to strengthen the social safety net, Mr. Yang’s plan is more likely to succeed.

Persuading voters to embrace Mr. Yang’s idea, however, won’t be easy. Under his plan, lower-income families would get back more than they pay in taxes, but everyone would see their taxes increase. Higher taxes are always a hard sell.

Mr. Yang’s plan is more likely to work. Whether it can win over public opinion remains to be seen.

N. Gregory Mankiw is the Robert M. Beren Professor of Economics at Harvard University, and was chairman of the Council of Economic Advisers under President George W. Bush.