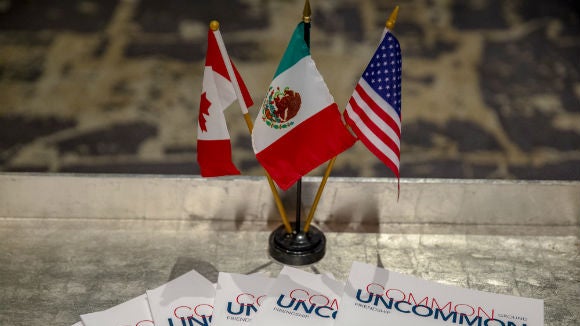 One of the best ways Congress could stimulate the economy and steer us clear of a recession would be to pass the free-trade agreement between the U.S., Mexico and Canada known as USMCA. It would help American farmers, auto companies, our technology firms and the American pharmaceutical industry, to name a few. By further isolating China as the odd man out, it would help mightily in winning concessions from Beijing in ongoing trade talks.

What is House Speaker Nancy Pelosi (D-Calif.) waiting for? Is she in? Or isn’t she? Almost everyone agrees the USMCA would pass the House by a comfortable margin, if rank-and-file members are allowed to take a vote, and it would pass easily in the Senate.

Pelosi is said to be pushed by her hardline “Never Trump” caucus to avoid giving this president any economic or foreign policy victory, even if it helps their own workers and districts.

An extreme cynic might wonder whether the House speaker would support anything that boosts the economy, since by doing so it would help Trump too. But let’s not ascribe any sinister motives and, instead, lay out the economic case for reestablishing a reliable, long-lasting free-trade zone for North America.

Start with this one little fact that surprises many people: Mexico and Canada are far more important trading partners with the U.S. than is China. The United States exports about four times as much in goods and services to our North American neighbors as we do to the Chinese. The original North American Free Trade Agreement (NAFTA) – which was President Reagan’s vision but ultimately was signed into law by President Clinton – lowered tariffs sharply and thereby expanded trade flows among our three countries by roughly 70 percent in the ensuing 20 years after its passage.

There were flaws in the old NAFTA pact, and the political support for the old trade deal was waning — demonstrated by Trump’s 2016 string of electoral victories in Midwestern states, where he called NAFTA “the worst trade deal ever.” It was time for a NAFTA facelift.

There are certainly flaws in the USMCA, too, but on balance free-traders should celebrate many of the deal’s modernizations. The intellectual property protections under the USMCA are the toughest ever for our technology, manufacturing and pharmaceutical industries. Biologics will receive 12 years of patent protections, as opposed to the current eight years in Canada and less than half that in Mexico. This will help encourage funding and development of a new generation of life-saving drugs.

The independent, non-partisan International Trade Commission (ITC) estimatedthat the USMCA will have a greater positive impact on the U.S. economy, jobs and wages than any other trade agreement it has ever reviewed. The ITC predicts that the USMCA will raise real U.S. Gross Domestic Product by 0.3 percentage points and add 176,000 jobs to the American economy. This is by far the best score the ITC has ever given to any trade agreement — including President Obama’s Trans-Pacific Partnership (TPP).

USMCA also is an anti-recession insurance policy. The biggest threat to the U.S. economy – now in its 11th year of uninterrupted expansion – has been the slowdown in capital investment by U.S. firms. That is due largely to uncertainty about the political fate of trade deals with China or the USMCA. There’s not much Congress can do about Beijing’s reticence over a new trade deal, but passing USMCA can happen soon.

Speaker Pelosi and other Democratic politicos are griping about insufficient protections for workers and the environment. The reality is that Trump insisted on labor provisions – some of which I oppose – that guarantee less wage competition from Mexican factories. Meanwhile, free-trade agreements have made Mexico richer, which in turn has meant improvements in clean-air and clean-water standards south of the border.

President Trump should not give in to Democratic demands to renegotiate more draconian measures supported by American labor unions and the extreme “green” groups, which could become poison pills in this carefully crafted deal.

Many Democrats have – in some cases, correctly – pounded Trump for his pro-tariff trade policies and his reversal of trade deals, such as the TPP. Now the Democratic House has before it a trade deal that is critical to maintaining free trade on the North American continent and with our two most reliable trading partners. Pelosi can be a profile in courage by standing up to her left flank of “Never Trumpers.” But if she instead torpedoes the USMCA by refusing to allow a floor vote, she will do damage to the economy and expose her party’s hypocrisy on trade. Americans should be watching very closely.

Stephen Moore is a distinguished visiting fellow at the Heritage Foundation and an economic consultant with FreedomWorks. He served as an economic adviser to the 2016 Donald Trump campaign. His latest book with Arthur Laffer is “Trumponomics: Inside the America First Plan to Revive Our Economy.”