Home Corporate Governance Biden Should Look to the Fossil Fuel Industry as a Partner in... 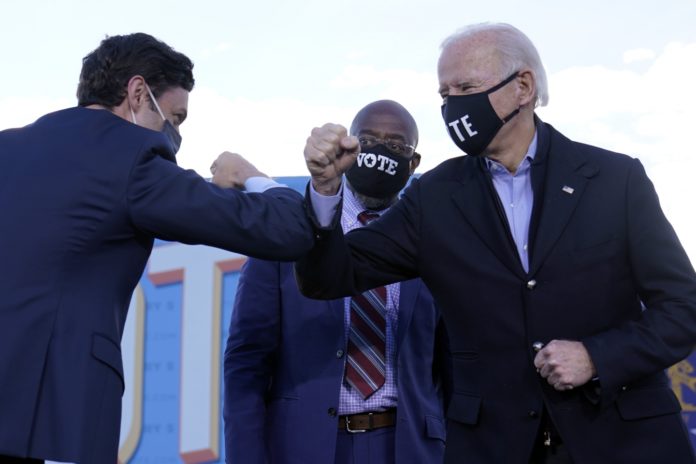 President-elect Joe Biden has made clear that climate change policy will be a centerpiece of his administration. He has pledged to return the U.S. to the Paris Treaty, and his announced appointments – including John Kerry as his international climate envoy, Gina McCarthy as the White House climate coordinator, and Jennifer Granholm as Energy Secretary – suggest a strong push to shift the transportation sector toward electric vehicles (EVs) and the power sector to renewables.

Reducing greenhouse gas emissions is certainly good public policy – but so is ensuring that the U.S. does so without sacrificing its energy security. Fact is, fossil fuels will be needed in the short, medium, and long term to meet America’s energy needs. Pursuing an overly aggressive energy transition is not practical.

The sheer scale of the energy industry is difficult to understand for those not involved in it. Consider that, despite billions of dollars invested in growing the U.S.’s wind and solar generating capacity – more than $574 billion over 15 years and $59 billion in 2019 alone – the Energy Information Administration says that wind generated only 7.1% of U.S. power last year. Solar accounted for just 1.7%. Keep in mind, too, that in order to become a dominant power source for the national grid, renewables will need backup power to address their intermittency (i.e., delivering power when the sun doesn’t shine or the wind doesn’t blow). That means hundreds of billions more in investments in battery installations to go along with the investments in wind and solar generation, not to mention the needed infrastructure investments in the grid itself to connect all this new generation capacity. Clearly, we are still decades away from breaking free of fossil fuels.

The scale of the transportation sector is another consideration. The Alliance for Automotive Innovation estimates that EVs accounted for more than 328,000, or almost 2%, of new vehicle sales in the U.S. in 2018. But with nearly 275 million cars in the U.S., that accounts for less than one-half of 1% of the total vehicle fleet. With light-duty vehicle retirements typically occurring at around 15 years, it’s clear that even if we significantly increase the rate of EVs sold in the U.S., we remain decades away from electrifying the vehicle fleet. A recent report by the Fuels Institute highlights the realities surrounding decarbonization options.

The point is not that renewables or EVs are a bad idea, but simply to highlight that fossil fuel power generation and internal combustion engine vehicles are going to be a part of our society for many years.

It’s also important to examine the political realities that face the incoming administration. Regardless of what happens with the two Georgia Senate runoff races, there will be no strong majorities in either the House or the Senate, making serious legislative action on climate change highly unlikely. Further, regulatory efforts can have a lasting effect only if they remain in place long term. Just look at how the Trump administration dismantled McCarthy’s Clean Power Plan, enacted when she ran the EPA during the Obama administration, for evidence of this. To make real progress in reducing greenhouse gas emissions, the Biden administration must work with industry to develop voluntary and regulatory programs.

It will likely find willing partners. As The Wall Street Journal’s chief economics commentator Greg Ip shared on an American Council for Capital Formation webinar last week, some energy companies would welcome – and are even advocating for – a price on carbon. The fossil fuel industry has established multiple programs and made numerous pledges to reduce greenhouse gas emissions in recent years. In 2020, for example, the Edison Electric Institute and the American Gas Association jointly released a voluntary ESG reporting framework called the Natural Gas Sustainability Initiative that includes an emissions reporting component. The American Petroleum Institute’s Environmental Partnership  program includes over 85 companies that have pledged to reduce methane emissions through efforts that address six of the most significant sources of methane emissions from field operations.

Similarly, the Oil and Gas Climate Initiative has initiated multiple programs to reduce methane emissions, improve energy efficiency, and invest in technologies to capture carbon emissions. The Southern Company, one of America’s largest utilities, earlier this year pledged to achieve net-zero emissions by 2050. ConocoPhillips has established a goal of net-zero emissions from operations by 2050. And ExxonMobil has made a commitment to reduce the intensity of upstream greenhouse gas emissions by 15% to 20% by 2025, methane emissions intensity by 40% to 50%, and flaring by 35% to 45% by 2025. The company also aims to eliminate routine flaring altogether by 2030 and has announced a continued investment in low-carbon technologies.

Fossil fuels will be with us for decades, but major energy companies are changing with the times. More and more, announcements like these are becoming the norm, as oil and gas and utilities firms accept the challenge to reduce emissions and develop technologies that will provide even greater reductions in the future. President-elect Biden should applaud commitments like these, and his administration should recognize that without collaborative efforts by industry and government, progress will be difficult – and fleeting.

Kyle Isakower is Senior Vice President for Energy and Regulatory Policy at the American Council for Capital Formation.

Analysis of Proxy Advisors’ Recommendations During the 2021 Proxy Season