Home Economic Policy What if It Can Happen Here? 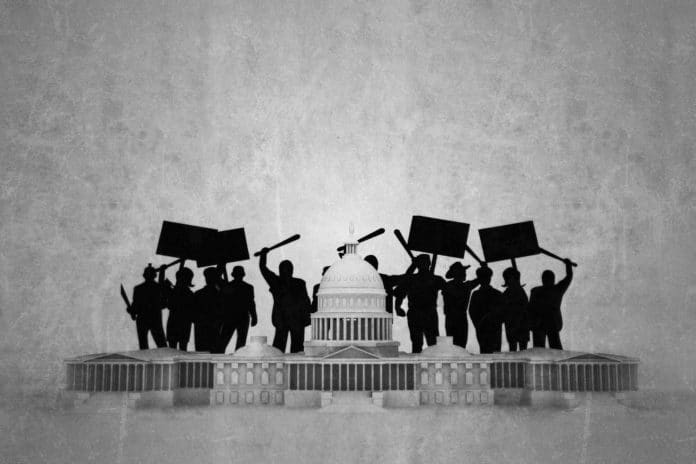 For the first time, I’ve begun to understand the plight of German Jews in the late 1920s and early 1930s. Some concluded that this time was different and acted accordingly, often by leaving the country. But most could not take the worst case seriously, or even conceive of it. We’ve seen bad times before, they thought, and we’ve always managed to get through them. Surely our friends and neighbors won’t believe unscrupulous demagogues. We’re all good Germans, aren’t we?

I recognize the pitfalls of Weimar analogies, so let’s look at some current evidence that troubles me.

In the year since a mob tried to disrupt the certification of Joe Biden as the duly elected president of the United States, public opinion hasn’t budged. About 7 in 10 Republicans continue to deny that Mr. Biden was legitimately elected. Some 47% of Republicans describe the attack on Congress as an act of patriotism, and 56% say the attackers were “defending freedom.”

Forty percent of Republicans believe that violence against the government is sometimes justified, a view shared by 23% of Democrats and 41% of independents. Overall, support for the use of violence has risen to 34% from 10% in 1995 and 16% in 2010.

Some 68% of the American people have come to believe that the events of Jan. 6 represent an increasing danger of political violence, compared with 32% who regard it as an isolated incident, and 62% expect violence by the losing side in a future presidential election. A survey released on Jan. 4 found 83% of Americans are worried about the future of America’s democracy, and 71% say it’s weaker than it was four years ago. Overall, two-thirds of Americans regard U.S. democracy as “threatened,” compared with only one-third who describe it as “secure.”

On the legal front, the threat to the electoral system in some respects has intensified. In many states, GOP legislatures have moved to reduce the authority of secretaries of state and other officials charged with overseeing and certifying the vote count. A few lawmakers are asserting the legislatures’ alleged constitutional authority to set aside the popular vote and select their own slates of electors.

Equally threatening is Congress’s failure to reform the Electoral Count Act of 1887. That law was adopted in response to the presidential election of 1876, in which contested slates of electors from three states created a deadlock in the Electoral College, resolved only by a para-constitutional political deal. Contemporary legal analysts say the law is vague or ambiguous at various points and vulnerable to serious constitutional challenge.

Writing last month in National Review, Benjamin Ginsberg, a veteran Republican election lawyer, urged his party’s leaders to support an update of the ECA before it’s too late. A rewrite, he said, should clarify the role of the vice president, the congressional process for deciding between competing slates of electors from the same state, and grounds for congressional objections to electors. The new bill also should answer some questions: Is a “majority” of the Electoral College all 538 electors or only those present and voting? Can a state hold an election after Election Day if it claims that the results were tainted? In cases of disagreement, who is the state’s “executive” with the power to certify its slate of electors? The list goes on.

The country’s antiquated electoral laws and ramshackle voting procedures increase the chances of violence in the next close presidential election. And the next election likely will be close. In the nine presidential elections since 1988, the winner has prevailed by less than 8 percentage points—a record matched only by contests between the end of the Civil War and the start of the 20th century. We are closely divided as well as deeply divided, the worst scenario for effective governance in the Madisonian constitutional system.

Although we know how to reduce the chances of a contested election in 2024, it is far from clear that the political parties can agree on the necessary steps. If not, the people’s fears could become a reality, and political violence could deal constitutional democracy in America a fatal blow.