Home Energy & Climate President Biden Should Own His Share of the Blame for High Prices...

President Biden Should Own His Share of the Blame for High Prices at the Pump
The Biden administration is in crisis over the high price at the pump. Despite polls earlier in March showing that Americans support sanctions on Russian energy, even if it meant higher energy prices, the administration is clearly feeling the heat that they need to provide relief to consumers. And with good reason. A recent Gallup poll shows that 77% of respondents said that they worry about the availability and affordability of energy either a “great deal” or a “fair amount.”

Is Biden really to blame? The sanctions that he imposed on Russian energy are estimated to take about 3 million barrels a day (MBD) off the global market, a significant amount that clearly is impacting global price. Given the necessity of combatting Putin’s aggression in Ukraine, it’s hard to blame the President for the run up in price since the imposition of Russian sanctions.

But what about his actions before sanctions? The President’s detractors have argued that he has waged an attack on fossil fuels since he took office. In his first few days on the job, he reversed the permit approval for the Keystone XL Pipeline, effectively killing the project, and he halted leasing of federal lands for fossil fuel development. More recently, the administration has issued proposals from FERC and the SEC that could, respectively, make pipeline permitting much more difficult and increase the cost of capital for fossil fuel interests.

Now the administration is scrambling for high ground on energy prices, with a series of announcements that include opening the Strategic Petroleum Reserve to an unprecedented 1 MBD release for 6 months, a request that Congress impose additional fees on inactive federal leases, and a call to switch to renewables to eliminate reliance on fossil fuels. The transition to a renewable energy economy is fraught with difficulty obtaining critical minerals, as seen in California, so the President is also taking actions to enhance critical mineral production to help with the renewables transition.

With this announcement, the President took pains to blame the oil industry for high gasoline prices. And last Wednesday, his allies in Congress hauled oil company executives in yet another congressional effort to vilify the industry. It’s a long-tested PR approach to addressing energy price increases: put oil company executives in front of the cameras and accuse them of price gouging. Problem is, it’s not true. Note the recent analysis by self-proclaimed left-leaning economic analyst and journalist Doug Henwood, who notes that:

There is no gouging going on in today’s gasoline market. Price at the pump is not under the exclusive control of major oil companies, despite showboating allegations of Congressional leaders. It is based in large part by the price of oil, which is set on the world market and is a direct response to factors impacting supply and demand. So, when Russian sanctions take 3 MBD off the global market, there will be an impact. And when an administration imposes an anti-oil agenda on the domestic oil industry – including punitive regulations, slow permit processing and difficulty permitting infrastructure altogether – that will have an impact, too.

President Biden should not be blamed for the increase in price at the pump since the war in Ukraine began, which he rightfully calls “Putin’s price hike,” but he’s being disingenuous when he blames oil executives for the run up in prices we experienced in 2021. Some of that increase no doubt is attributable to the rapid increase in demand as the economy grew following the 2020 pandemic-driven economic slowdown. But some of it is driven by his own anti-oil policies, and he needs to own that.

If we are to be smart about energy, we should strive for an orderly transition for the energy sector. That is, encourage the development of lower-carbon technologies, and when they are cost-effective, readily deployable, meet consumer needs and are supported by stable supply chains, they will out-compete fossil fuels for market share without government interference. But until that time comes, vilifying fossil fuels, and trying to push them out of the market prematurely does consumers a disservice and leaves us vulnerable to price spikes when market upsets occur.

Kyle Isakower is Senior Vice President of Energy and Regulatory Policy at the American Council for Capital Formation. 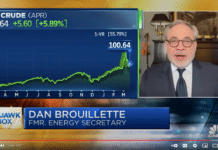