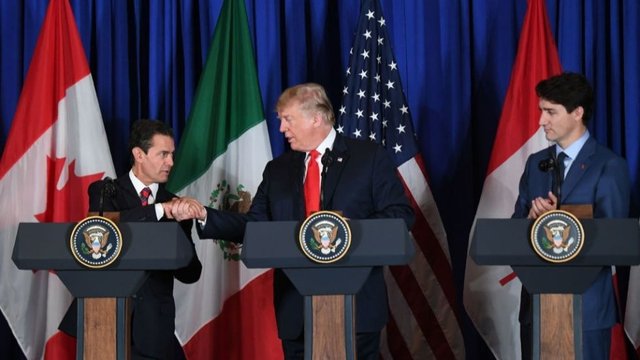 Who would have guessed as short as three years ago that trade policy would dominate American and world politics? The champion for global trade liberalization has suddenly become the leader in a new wave of tariff increases since President Trump took office.

It’s in this environment we have the first trade agreement he has put his distinctive stamp on: the U.S.-Mexico-Canada Agreement (USMCA).

The deal that was reached last fall by the three countries after nine rounds of contentious negotiations, is now facing an uphill battle in Congress if recent statements coming from Democratic leadership are any indication.

The arguments put forth by both political parties and the administration before, during and after negotiation show a deep division between the politics and economic facts, and in some cases, a distortion of the latter.

It’s important to take a moment to look back on the close working relationship between the three North American Free Trade Agreement (NAFTA) parties that began long before the signing of the original 1992 agreement.

The trade relationship between Canada and the U.S. had been evolving and expanding since the 1965 U.S-Canada Automotive Product Agreement, which removed the tariffs on cars, trucks and automotive parts. At the time, President Lyndon B. Johnson’s approach to trade with our allies was different from the current approach.

When Canada introduced a plan to support their struggling auto sector, despite calls for countervailing duties, the president responded by asking the State Department to negotiate the issue to avoid a trade war. This began a productive and long-lasting alliance that benefited both sides economically.

Our trade relationship with our southern neighbor has evolved over time as well. After a long period of protectionist policies, Mexico went through major economic reforms, including decreasing trade barriers.

That trend was strengthened by its accession to the General Agreement on Tariffs and Trade (GATT), which the U.S. had actively lobbied for. Tariff rates were reduced from a high of 100 percent to 20 percent in 1987.

The increasing importance of the U.S. presence in Mexico’s trade and investment inflows was one of the motivators for Mexican engagement in negotiations for a free trade agreement with the U.S.

At the same time, the U.S. was interested in an agreement in order to have increased access to a large emerging economy with 100 million people, as well as to support its flourishing democracy.

The negotiations that began first between Mexico and the U.S. and were later extended to include Canada, ended with a first-of-its-kind trade agreement that, at the time, was the largest between two developed and one developing country.

Over its 25-year history, NAFTA was instrumental in creating efficiency gains in production through integration of supply chains and lowering costs for producers and consumers, as well as reducing uncertainty by setting the rules for every player and thereby encouraging investment and risk taking.

In considering who lowered their trade barriers more, it is important to examine the starting tariff rates: According to a study by Lorenzo Caliendo and Fernando Parro, in 1993, sectoral tariff rates imposed by Mexico, Canada and the U.S. to NAFTA members were, on average 12.5 percent, 4.2 percent and 2.7 percent, respectively. By 2005, these rates dropped to almost zero.

It is not surprising to see how the trade between the three countries boomed over the years: Overall trade in goods and services has almost quadrupled, from $337 billion in 1993 to $1.3 trillion in 2017.

It is not only large businesses, but also small U.S. businesses that have benefitted. One study found that in 2015, there were 89,160 firms that were exporters to Canada and 59,438 firms exporting to Mexico, the majority of which had fewer than 50 employees.

The agreement also played a key role in keeping certain industries competitive vis-à-vis the other regions in the world and helping other industries to actively flourish. According to a Boston Consulting Group study, labor productivity in the auto sector increased in all three countries, with the U.S. seeing the highest boost in output per employee between 1995 and 2016.

Like the auto sector, the energy sector represents a highly integrated market with spreading energy infrastructure and commodity trade between all three countries.

These are only a few examples that demonstrate NAFTA’s benefits and the potential it holds for the region. The USMCA agreement updates certain provisions, bringing them into the 21st century and tightening the agreement on environmental and labor fronts while increasing U.S. GDP and creating jobs.

While it can sometimes be difficult to make decisions based on predictions about the future, a 25-year history of successful collaboration should be a guide to policymakers allowing them to make a positive decision and put this unnecessary fight behind us.