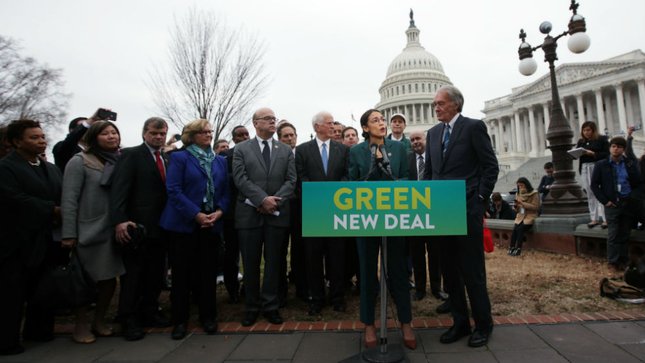 As a job creator, the GND has already created a boom – in economic modeling. Since its introduction, economists from every corner have produced figures on the cost of the GND, such as the $7 trillion price tag cited by many.

That is a large figure, and we have begun to see larger numbers coming out from groups such as Americans for Prosperity, ranging from $51 trillion to $93 trillion over the 2020-2029 period for the big-ticket items, such as providing jobs and health care for all, as well as transforming the energy sector.

Christopher Clack, Vibrant Clean Energy group’s CEO, has estimated that it will cost $27 trillion just to reach net zero greenhouse gas (GHG) emissions by 2035. The broad difference begs the question: Can the GND be modeled?

Like other economists, I also focus on the numbers and have automatic questions about costs and benefits, but more importantly, how different pieces of this gigantic policy would interact with and impact each other. I am a firm believer in opportunity cost.

For the record, I don’t disagree with the important goals in the GND. After all, growing up in the Turkish capital of Ankara in the 1980s, I was one of the kids “enjoying” school closures due to the air pollution caused by heavy coal usage.

But at the same time, I also remember continuous power outages resulting from insufficient energy infrastructure.

Obviously, to have an educated estimate about the cost, we need additional details about the plan that would allow researchers to undertake reliable economic modelling exercises.

But my discussions with modelers have highlighted the difficulty of this task even if we had more detail, partly due to the ambitious social policies envisioned in the deal.

The general consensus seems to be that it will be necessary to analyze the deal in pieces, with a warning: Despite being a worthwhile undertaking, missing important interactions between different policies could paint a completely different picture.

For example, government regulations and new labor standards could impact the cost of much needed new investment to achieve the climate goals.

Even if we just concentrate on parts of the deal, such as meeting 100 percent of power demand in the United States through clean, renewable and zero-emission energy sources within 10 years, it will be hard to find a reliable and realistic cost estimate.

Completely ignoring the issue of the short time frame provided, Rep. Ocasio-Cortez’s original description of the GND (as stated in her fact sheet) would eliminate carbon capture use and storage (the fact sheet states that “the CCUS technology to date has not proven effective”) and would allow no new nuclear build, would make solving this equation almost impossible without a vastly improved storage technology.

Also, a model that might perfectly represent the energy markets might not factor in financial impacts. But it does underscore the importance of the fine print – what the assumptions were, what was not considered and how that could impact the results in one way or another.

If a model assumes an unrestricted nuclear build in 10 years to reach zero emissions to back up all the wind and solar energy required to support the electricity demand in this country, you should have a lot of questions. After all, there has been 20 years between the two newest nuclear plants that are currently operating in the U.S.

And while we are concentrating on whether the GND can be done or not, we are missing the big picture. Natural gas has played a key role in decreasing GHG emissions.

We do not know what the next fuel source or new technology that will help us will be. But by taking a large chunk of energy sources out of the game, we could be also removing the next solution.

There is also the question about the impact of potentially stranded assets on the U.S. economy. Fossil fuels play a key role in every aspect of our lives and for many of us, they are a sizeable portion of our savings (through 401(k)s and other retirement assets).

I asked David Montgomery, an expert with more than 40 years of experience in energy and economic modeling, about the possible impact of such a move on U.S. financial markets and whether the existing macroeconomic models can represent this impact. His short answer was no:

“Economic models are neither designed for nor are they capable of being modified to capture the effects of changes in underlying political institutions and property rights,” Montgomery noted.

“Historical examples can give some idea of the magnitude of harm that might be brought about: Venezuela under Chavez, Argentina under Peron or Zimbabwe under Mugabe come to mind. Only in retrospect has it been possible to calculate the cost of socialism to the people of those countries,” he added.

Does all of this mean that we should just ignore the economic models? Of course not. As I tell my students, each model has its own strength and weakness, and they are not a perfect replica of the world. All the more reason for policymakers and political candidates to proceed cautiously before citing a price tag.

Pınar Cebi Wilber is the chief economist at the American Council for Capital Formation and an adjunct lecturer at Georgetown University’s Department of Economics.

An Inverted Yield Curve May Not Portend Doom