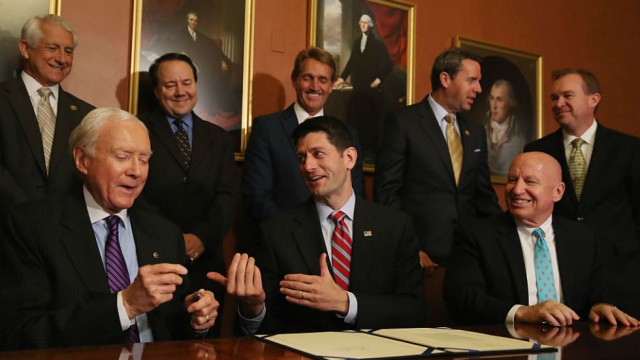 Congress has a good chance of passing the Infrastructure, Jobs and Tax Reform Act in 2017.

Here are three reasons why.

“There’s only one missing ingredient for tax reform and that’s going to change in 2017,” House Ways and Means Chairman Kevin Brady (R-Texas) said on Tax Day 2016. On Nov. 8, the chief tax writer in the House got his wish: a president who counts tax reform among his top priorities.

The three people who now matter most are President-elect Donald Trump, Speaker of the House Paul Ryan (R-Wis.), and Senate Majority Leader Mitch McConnell (R-Ky.). All want tax reform and have the majorities in both chambers of Congress to get it done.

Compare the situation today with February 2014, when the House was under Republican control, but the White House was occupied by a Democrat — and the Senate was controlled by Democrats, too. Then-House Way and Means Chairman David Camp (R-Mich.) unveiled a comprehensive tax reform plan that then-House Speaker John Boehner (R-Ohio) described as “blah, bah, blah, blah.”

Then-Senate Minority Leader McConnell buried Camp’s plan. President Obama had other things on his mind, as well.
Today, there’s not only leadership at the top, but Brady recently said that he was “so excited I can’t sleep.” The House GOP tax plan overlaps with 80 percent of Trump’s ideas and draft legislative text is expected before Inauguration Day.

Senate Finance Committee Chairman Orrin Hatch (R-Utah) was one of the first senators to endorse Trump, and he and the president-elect have talked about the agenda for next year and both want their legacy to include tax reform.

2. All the ingredients for tax reform are there

The Tax Reform Act of 1986 was possible because it included something for all the major players. President Reagan and congressional Republicans wanted lower tax rates and Democrats wanted to close loopholes. The latter paid for the former.

Of course, the devil is in the details. The ideals of tax reform — simplicity, pro-growth and fairness — run into legitimate concerns of competing businesses and industries, as well as the favorite deductions of different stakeholder groups.

3. The mechanism for a deal exists

The Republican majority in the House can pass tax reform without any problem. It’s a different story, however, in the Senate, where 60 votes are required to advance even the slightest controversial legislation.

However, there is a way around the Senate’s filibuster rules. McConnell confirmed on Dec. 12 that the Senate would pass tax reform using the budget reconciliation process, which is a privileged motion that needs only a simple majority to pass.

Bipartisanship often results in better policy. The opposite often results in controversial laws, such as ObamaCare. Historically, the Senate Finance Committee has worked in a bipartisan fashion and that is still the preference of Hatch and the ranking Democratic member, Ron Wyden of Oregon. There are also a number of Red State Democratic senators up for reelection in 2018,who could make tax reform bipartisan.

I reckon that there’s a 63 percent chance of tax reform succeeding in 2017. Why? Because it has been that many years since the Internal Revenue Act of 1954, the first comprehensive reform of the federal income tax since its origin in 1913.

That seems as good a reason as any to hope 2017 will finally be the Year of Tax Reform.

Mark Bloomfield is president and CEO of the American Council for Capital Formation. He served as secretary of President-elect Ronald Reagan’s Transition Force on Tax Policy. Follow him on Twitter @MrCapitalGains.

With Tax Reform, Save the Forest Rather Than Cut Down Trees