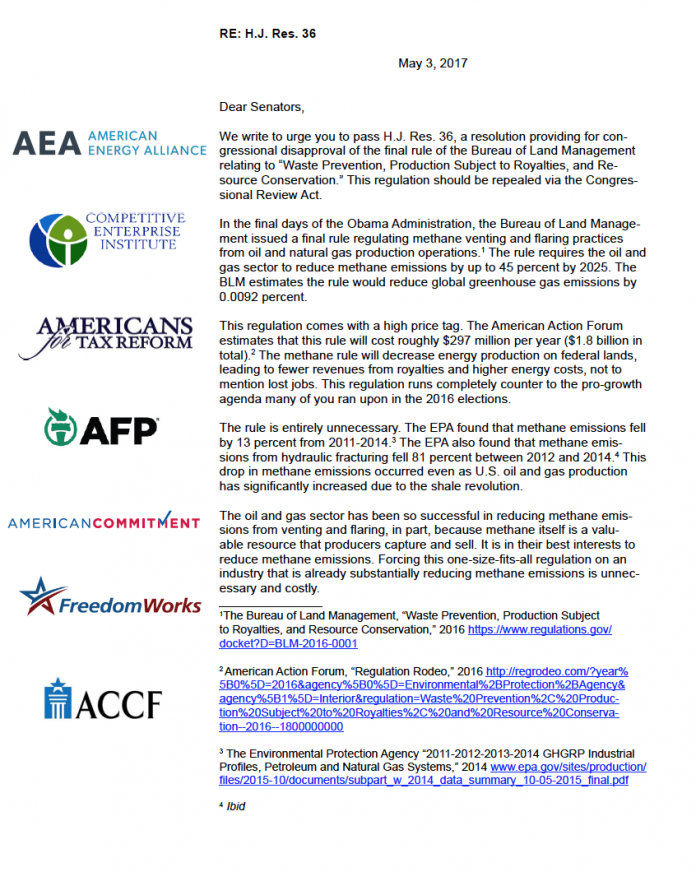 WASHINGTON, DC – The American Council for Capital Formation (ACCF) today joined a coalition of 10 other pro-economic growth organizations in calling on the U.S. Senate to use the Congressional Review Act to repeal the Bureau of Land Management’s (BLM) methane regulation.

The Senate’s ability to use the CRA to nullify the methane rule expires on May 11.

BLM’s methane and waste prevention rule requires oil and natural gas producers on federal lands to reduce methane emissions by up to 45 percent by 2025. The rule is just one of dozens of costly regulations pushed through in the final days of the Obama administration.

The rule is expected to cost producers up to $297 million per year to comply, while BLM estimates it would reduce global greenhouse gas emissions by only 0.0092 percent.

BLM began phasing in the rule in January but the most-costly provisions do not take effect until January 2018. Congress has an opportunity in the meantime to nullify the rule with a simple majority vote on a resolution of disapproval under the CRA’s privileged process.

The CRA’s expedited review process allows Congress to invalidate certain agency actions with a simple majority vote within a window of 60 congressional working days. The Senate has less than a week to hold a vote, though.

Failure to act by May 11 would force the Interior Department to add undoing the methane rule through the formal administrative process to its already long list of priorities. It also opens the door to additional legal challenges from environmental activists that would further muddy the regulatory waters for energy producers.

“Methane emissions have been falling for years as production of natural gas has exponentially increased. This has occurred without any direct federal mandate,” Doyle said. “There are any number of other real problems federal regulators could focus on. Instead, they appeared to create a rule in search of a problem.”

The House of Representatives voted 221-191 in February to overturn the BLM rule using the CRA. The Senate has only a few days left to support improvements to the federal regulatory system and repeal BLM’s redundant rule.

The Obama administration issued some 600 major regulations with an estimated cost of $740 billion between 2009 and 2017. In an attempt to reverse the accumulation of regulation, President Trump has ordered federal agencies to remove two rules for every new rule they propose and Congress has successfully used to Congressional Review Act to jumpstart that effort.

The full text of the letter is available here.