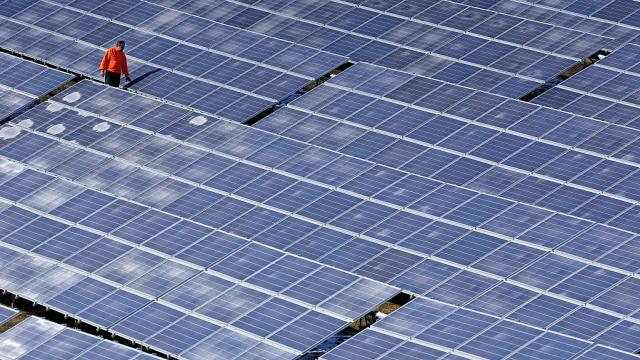 Energy is the food of nations — it is vital to economic prosperity, public health and national security. So, we shouldn’t be upset when the government gets involved in supporting innovative energy technologies. For decades, our federal government has done just that — and we’ve all benefitted.

Opponents of this federal support often characterize it as the government “picking winners,” but federal efforts to develop such a critical resource is far more complex than betting on a horse race. By supporting energy development programs, the government isn’t backing a single company or technology, it’s developing new technologies to ensure we all win.

Much of the federal support for emerging energy resources comes through a program known as Title XVII, the Innovative Technology Loan Guarantee Program. As the name implies, it was designed to fund innovative and cleaner forms of energy technologies, including advanced fossil energy, nuclear energy, renewable energy, and energy efficiency.

Created during the George W. Bush administration, the robust program finances energy research and development that is too risky for the private sector. Despite this risk, though, the program’s loss ratio is only about 2.3 percent, better than most banks. Of the 25 companies funded through Title XVII, only two have gone bankrupt. The rest continue to repay their government loans, and have generated more than $1.7 billion in interest payments to the government.

As with any investment portfolio, there will be some losers. In this case, the highest-profile loser was Solyndra. Critics still use the solar company’s 2011 bankruptcy to lambast government involvement in energy research, but Solyndra’s failings were unique and don’t warrant a general conclusion about the efficacy of federal programs.

Plenty of energy companies have depended on government support in some way. Take the oil industry. The biggest technological advance in oil and gas production in more than 50 years — hydraulic fracturing — was supported by federally funded research that began in 1976.

So how do we get more innovative energy success stories and fewer failures? First, we need to recognize that the development of innovative energy technologies takes years or even decades. (The first hydraulic fracturing, or “frack,” job was done in 1947, but the technology wasn’t economically viable until 2003, and required millions in private investment on top of federally funded research.)

Second, the best role for the government is to finance early – or “risky” – but promising technologies and allow the market to determine how they fit in to the larger energy portfolio. Notably, while the federal government that kept fracking research and development going for all of those years, it was an innovative entrepreneur that figured out how to put the pieces together with the help of a ripe market that was hungry for innovation.

Third, adopt a clear exit strategy, like the one to start sunsetting renewable energy tax credits by 2020. Regardless of what you think about tax credits or sunsetting them, markets need certainty for investment planning. Like oil before it, solar power may soon reach the point where federal subsidies are unnecessary. When that happens, and it’s important that it does, American consumers and corporations will benefit from a broader energy portfolio — one that is cleaner, reliable and affordable.

Finally, we should accept that there will be failures along the way to successes. Scientists and entrepreneurs understand this all too well. The scientific method requires it and entrepreneurs live it every day. The Department of Energy initially set aside $10 billion for losses from Title XVII, but the actual losses have fallen well short of that reserve. That’s the nature of funding cutting-edge technology, as any venture capitalist will tell you.

Loan programs like Title XVII aren’t picking winners. They’re supporting the hard work that nobody else will do, but which benefits us all. If that is “picking winners,” I’ll take that bet every time.

Drew Bond is a Senior Fellow and Director of Energy Innovation Programs at the American Council for Capital Formation Center for Policy Research. In 2007, Drew was appointed by President George W. Bush to the role of Senior Advisor at the U.S. Department of Energy (DOE) for the Office of Energy Efficiency and Renewable Energy (EERE).