Home ACCF Scholars No winners in a US–China trade war 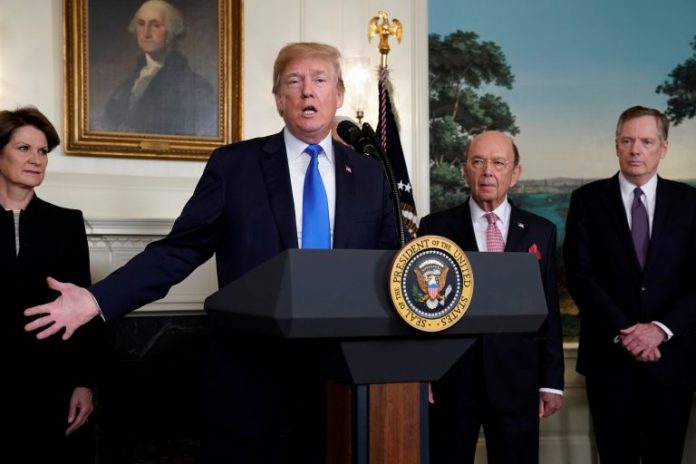 In 2017, US President Donald Trump instructed the US Trade Representative (USTR) to investigate Chinese violations of intellectual property rights, invoking Section 301 of the Trade Act of 1974. On 22 March 2018, the USTR concluded that China has implemented unreasonable policies and unfair practices to acquire foreign technologies. The USTR’s findings lay out valid complaints. But the threatened US response — punitive tariffs on merchandise imports from China — would neither benefit the US economy nor compel China to alter its policies and practices.

The USTR argues that China has used unreasonable policies and unfair practices with respect to foreign firms to foster its own high-tech firms. First, the USTR identified foreign ownership restrictions and administrative approval processes as underpinning forced transfers of technology. China’s foreign ownership restrictions (such as joint venture requirements, foreign equity limitations and investment restrictions) compel US and other foreign firms to transfer valuable know-how to Chinese partners as the price of entry to the Chinese market.

Foreign companies wishing to do business in China must also get numerous approvals from relevant local, provincial and federal regulators. The review process is viewed as an opaque and discretionary means by which Chinese government officials demand the disclosure of sensitive business information. Chinese policy effectively implies, ‘give us your technology for access to our market’.

The Made in China 2025 initiative has targeted high-tech industries. For example, regulations on new energy vehicles allow foreign companies to hold no more than 50 per cent equity and require their Chinese manufacturers to master the technology for producing a complete vehicle. Such measures deny foreign firms the right to sell their technology at a privately negotiated royalty and realise the full benefits from producing their unique goods and services.

The USTR has also accused China’s outward investment strategy of accelerating US technology transfers to China. When a Chinese company buys a US company, the former is entitled to apply the newly acquired technology in China. But the USTR investigation claims that the Chinese government plays an unfair role in directing investment towards US high-tech companies in aviation, semiconductors, information, biotechnology and robotics. Directly or indirectly, the Chinese government’s goals are pursued by state-owned enterprises (SOEs) that enjoy public subsidies, loans at easy terms, quick administrative approvals and preferential taxes.

In the USTR’s view, the combination of high-tech targets and government direction amounts to an unfair investment practice. Congress and President Trump embraced this view, which has resulted in a bill to ‘guard against the risk to the national security of the United States posed by certain types of foreign investment’ making its way through Congress. Trump has also threatened executive action to block Chinese firms from acquiring advanced US technology firms.

Trump has further announced that the United States may impose 25 per cent tariffs on about US$50 billion of Chinese imports and take other retaliatory actions. The list of 1333 products that could be hit by tariffs covers Chinese exports of machinery, mechanical appliances and electrical equipment. The list targets both intermediate and high technology goods as well as soybeans. The United States is also considering visa restrictions on Chinese students and professionals.

In prompt response, China released its own potential retaliatory measures on 4 April 2018: 25 per cent tariffs on US$49.8 billion of US exports to China. These are on top of the aluminium scraps and pork tariffs already imposed in response to US tariffs on Chinese exports of steel and aluminium. The potential new Chinese tariffs would mainly fall on transportation and agricultural products exported from states that support Trump.

The very next day, President Trump instructed the USTR to draw up a list of another US$100 billion of Chinese exports that would be subject to US counter-retaliatory tariffs. Chinese officials then promised to ‘match teeth for teeth’ and ‘fight the United States to the end’. In an effort to de-escalate tension, a bilateral meeting of senior officials took place in Beijing during the first week of May, but the United States and China failed to reach an agreement.

A trade war will not make much progress on intellectual property rights issues. If China–US trade collapses, both countries will suffer and financial markets will tremble. If the US global trade deficit — projected to reach US$600 billion in 2018 — shrinks in the wake of a trade war, it will only be because the US economy has slowed. This is not a happy outcome for the Trump administration.

An approach narrowly targeted at individual Chinese firms, particularly the SOEs that force technology transfer, would be less costly and perhaps more productive than blunderbuss tariffs. Moreover, the United States should not blithely disregard the WTO dispute settlement mechanism. Chad Bown argues that unilateral US actions weaken the country’s commitment to the rules-based global trade regime and spur China to operate outside the WTO. In the long run, this cannot serve US interests.

Trump is fixated on his country’s bilateral merchandise trade deficit with China, which measured US$376 billion in 2017. But trade actions directed against China will only shift the bilateral deficit to other US partners and at a substantial cost to the US. Only changes in US macroeconomic policies — the trade-weighted dollar exchange rate and the fiscal deficit — can make a significant difference to the US global trade deficit.

Even without a trade war, escalating tension between China and the United States could slow down economic growth in the Asia Pacific. The Asian Development Bank warns that escalating trade friction between two major countries could dampen business optimism across the region. Right now, the world economy is doing well and most countries are enjoying good times. The United States and China should not, by mutual intransigence, put an end to this recovery.