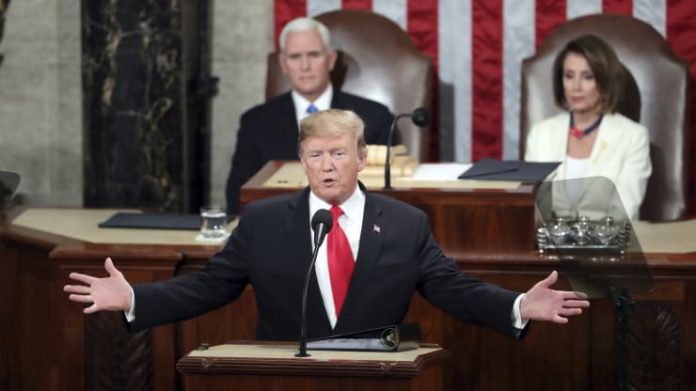 At the State of the Union address this evening, President Trump will have no shortage of pressing domestic and international issues to mention. From impeachment to the economy to his newly unveiled Middle East peace plan, many topics of great concern will be competing with one another for primetime.

But the president has a golden opportunity to address prominently the White House’s efforts to undertake the National Environmental Policy Act (NEPA) reforms currently under review for the public’s input.

While NEPA reform does not get the same kind of attention that flashier policy initiatives usually receive, it nevertheless deserves national attention and recognition because of the positive impact Trump’s proposed reforms would have on the future of our country’s infrastructure. These revisions will undo burdensome regulatory obstacles and unleash American innovation across all industries to invest in our aging infrastructure.

NEPA was originally signed into law 50 years ago by President Nixon. Its original goal was to assess the environmental impact of infrastructure projects and other major government actions before making an approval or rejection decision. These were practical reforms at the time, as environmental considerations had not become commonplace both in private proposals and in the consideration of approval by the government.

But in the decades since its enactment, implementation of the legislation has become bloated, outdated and a regulatory minefield especially for much needed infrastructure projects. According to Council on Environmental Quality’s 2018 survey, across all federal agencies the average environmental impact statement (EIS) completion time was four and a half years, and one quarter of the EIS took more than six years to complete.

The cost that is associated with NEPA review is also wide ranging and not readily available due to agencies not keeping track. But a 2003 task force report put the range between $250,000 and $2 million. As the costs often go hand-in-hand with time, it is not unreasonable to assume that these numbers are probably much higher today, costing taxpayers significant sums. As our nation’s highways, airports and bridges fall into further disrepair from the stress of population and economic growth, long wait times and high costs will deter businesses from making the fixes that we increasingly need.

The Trump administration’s reforms aim to reverse this trend through the streamlining of NEPA’s burdensome process.. Its goal is to shorten the review time to two years or less for all infrastructure projects. Not only could this create a building boom that serves as a stimulus for our economy. But it could also put thousands of middle-class Americans to work revitalizing our nation’s infrastructure.

The economic viability is evident by the more than 30 groups across many sectors of the economy that joined together to publicly approve of the NEPA reforms. The Chamber of Commerce in particular is championing this cause, advocating that the NEPA updates will “further revitalize our infrastructure and jump-start economic growth. It will reduce delays, unlocking investment in development projects and boosting job growth. It will likewise lessen the need for long-term, costly repairs to aging infrastructure.” Similarly, the head of North America’s Building Trades Union is hopeful that the building boom as a result of these reforms will lead to thousands of new constructions jobs.

Critics who sound the alarm about these reforms allege that they will lead to a less healthy environment. But they fail to see the forest through the trees. NEPA modernization will improve the efficiency of our transportation systems and boost investment in renewable energy projects, guiding NEPA’s original intent for safeguarding the environment into the 21st century. The American Wind Energy Association has come out in support of the NEPA review process, stating that offshore wind energy development has been encumbered by “unreasonable and unnecessary costs and long project delays” as a result of NEPA’s current bureaucratic backlog. With these reforms, it is not a question of choosing between the environment and the economy — infrastructure improvements go hand in hand with the protection of both.

Transition fuel sources such as natural gas development strike a balance between the two, and will benefit from a streamlining of the approval process. Natural gas pipelines often spend years mired in the permitting and litigation processes, having to go through multiple federal agencies and prolonged court battles before their opening. NEPA reforms will cut through these obstacles, further boosting the economy while making energy transport more efficient.

The less this pressing issue is publicly known, the less likely that the administration’s NEPA reforms can become a reality. If President Trump wants to see enhanced economic productivity, thousands of more well-paying jobs and streamlined renewable energy projects, he would be remiss not to prioritize the NEPA review process during his address to Congress. America’s infrastructure is more than ready for primetime.

Pinar Çebi Wilber, Ph.D., is executive vice president and chief economist for the American Council for Capital Formation, a free-market, pro-business think tank. She is an adjunct professor in the economics department at Georgetown University.