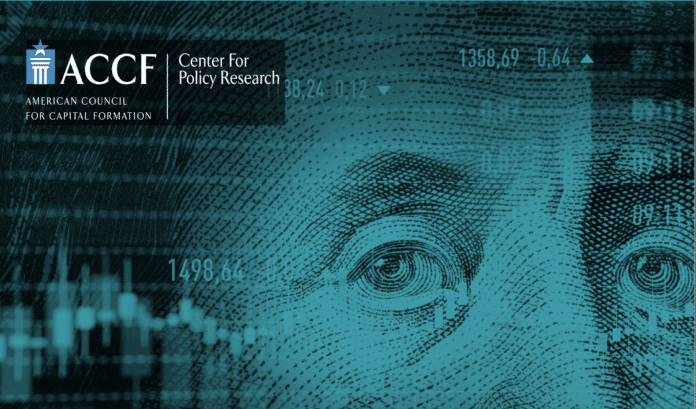 Washington, DC – As Congress continue to debate President Biden’s comprehensive Build Back Better legislation, a major sticking point remains over financing the package through higher taxes on the wealthy, including a proposed change to the tax treatment of appreciated assets when transferred to heirs in the event of death.  A new report by the American Council for Capital Formation Center for Policy Research (ACCF-CPR) examines Biden’s proposal to end the practice of “stepping-up” the basis for gains on inherited assets in excess of $1 million ($2.5 million for couples when combined with existing real estate exemptions) and making sure the gains are taxed if the property is not donated to charity.  The repeal could impact Americans beyond the targeted wealthy and, coupled with higher capital gains taxes, also lead to a number of tax compliance and administration problems.

“The potential tax increases from a repeal of step-up in basis or higher capital gains tax rates, could have unintended consequences for the much-needed investment and economic growth the Administration seeks,” said ACCF-CPR Executive Vice President and Chief Economist Pinar Çebi Wilber.  “In addition to the chilling effect that higher capital gains rates could have on businesses, including downsizing and closures, the tax code becomes far more complicated with proposed special carve-outs that could result in creating more opportunities for gaming the system through tax avoidance strategies.”

The report takes a detailed look at the treatment of capital gains taxes and impact on businesses under President Biden’s American Families Plan, which has a $1 million exemption and the proposal by the Senate Democrats which includes a $5 million exemption.  Under one scenario, a business with a $10 million fair market value (FMV) at time of death would see a $1.5 million increase in capital gains taxes (43.40%) under the Biden plan and approximately half of that amount under the Senate Democrats plan.  Another scenario looks at a $20 million FMV business and factors in both capital gains tax increases (43.40%) and estate tax (40%) implications.  Liabilities increase substantially, with the American Families Plan seeing a $4.7 million increase and the Senate Democrats Plan to see a $3.6 million increase.

These economic impacts from repealing step-up in basis could lead to significant economic consequences.  Based on findings from prior economic analyses, the ACCF report concludes:

Prior attempts to repeal or significantly change how the capital gains are taxed when transferred to heirs have failed of have been quickly repealed due to compliance and administration problems, including:

“Many of the impacted targets of the step-up repeal are small businesses, which have already suffered disproportionately during the pandemic. A further increase in tax burden due to repeal of step-up in basis could have additional negative impacts on the viability of these businesses, further slowing the potential growth of the U.S. economy,” Wilber concluded.

STEP-UP IN BASIS, CAPITAL GAINS, AND THE ECONOMY

No, a business expense is not just a tax dodge by...