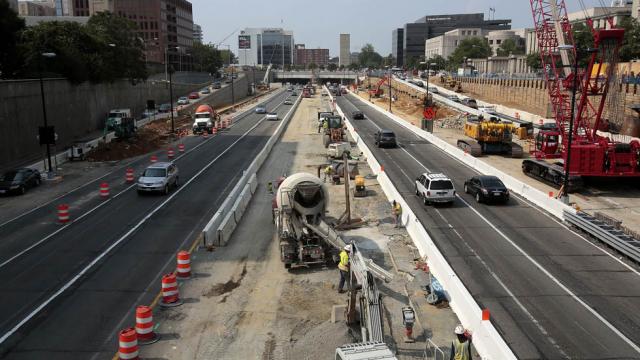 “America is a nation of builders. We built the Empire State Building in just one year. Is it not a disgrace that it can now take 10 years just to get a permit approved for a simple road?”

In this one line from his State of the Union address, President Trump summed up the biggest challenge with rehabilitating our nation’s crumbling infrastructure.

If the White House wants to chalk up another win with its infrastructure plan, it should be mindful of the mistaken assumptions of the last administration and tie support for any legislation to that of process reform for permitting and approvals.

The initiative was quickly plagued by excessive red tape and delays in the permit and approval process, including environmental reviews, that increased costs and ultimately mothballed projects.

By 2010, President Obama had to concede that “there’s no such thing as shovel-ready projects” and spent the next several years trying to streamline the process through multiple executive orders in an attempt to ensure collaboration, mandate timelines, track progress and increase efficiencies within federal agencies.

However, a year later in 2013, still saddled with permitting problems, President Obama specifically instructed federal agencies to reduce permitting timelines by 50 percent. The money was there, but moving forward on projects and putting people back to work proved exceedingly difficult.

As a result, a bipartisan congressional effort to address the delays in permitting led to the Federal Permitting Improvement Act, which was incorporated into Title 41 of the Fixing American’s Surface Transportation Act of 2015 (FAST Act).

However, while this legislation set the starting point for many desperately needed reforms, there is still much to be done to improve the process.

The current administration is off to a good start in recognizing the issue. President Trump signed Executive Order (E.O.) 13766 in order to help expedite the permitting process due to “routinely and excessively delayed…agency processes and procedures.”

More specifically, the president indicated that it was “one of the biggest obstacles” to implementing his infrastructure agenda. The administration then focused on addressing overall agency complacency with certain types of permitting decisions.

While the E.O. could not substantively change the statutory requirements that permits are subject to and a justified cause of some of the delay, the administration certainly has the authority to prioritize certain projects with national significance and more importantly, require agencies to expeditiously review permit applications.

To give further guidance to help the coordination process, in August 2017, President Trump signed E.O. 13807, which created a “one-stop shop” to make the process easier for working with the government. It also created a “lead agency” so as to increase overall efficiencies and potentially prevent errant regulators from unnecessarily holding up the process.

Some have criticized the move as potentially adverse to the environment, but when studies are literally thousands of pages long, it begs the question of whether too much is harmful to the public well-being and the completion of the project.

In the end, both the president and Congress have numerous tools at their disposal to expedite the permit approval process. Trump has begun to do do so through executive orders, and he urged Congress to pare down the permitting process to “no more than two years, perhaps even one.”

Congress also has a vital role in clarifying existing legislation, enacting new legislation to expedite the process where necessary and, when warranted, granting waivers to certain statutory requirements for permit approval.

Given the national importance of updating the country’s infrastructure and the historically lengthy permitting process, Congress and the president should continue to act to further expedite the permitting approval process to ensure the success of any infrastructure bill and, as President Trump said, “reclaim our building heritage.”

Tim Doyle is vice president of policy and general counsel for the American Council for Capital Formation, a pro-business think tank and lobbying group.