Home Economic Policy How Badly Will the Democrats Lose the Midterm Elections?

Will Congress pass some version of Build Back Better using budget reconciliation? How about any other major initiatives? If so, will they affect public opinion? My view is no BBB iteration is likely to pass, but more military aid to Ukraine probably will. So will something on China, a bill funding various Covid-related purposes, some appropriations for the coming year (but not a budget) and odds and ends, but nothing that moves the needle politically.

Does the war in Ukraine create a rally-round-the-flag effect for the president’s party like John F. Kennedy got after the 1962 Cuban Missile Crisis? The proximity of its resolution to the midterms allowed JFK’s Democrats to hold their House losses to four seats and gain four in the Senate. There’s been no sign of this happening for President Biden so far, and I’m doubtful it will.

Does inflation decline appreciably? Or will wages rise faster than prices? Either would soften the electoral blow for Democrats. I’m not an economist but I can’t see how inflation could fall dramatically by November. Mr. Biden spent too much on his American Rescue Plan and the Treasury Department and the Federal Reserve waited too long to act, as if inflation would dissipate on its own.

Will the economy be slowing or booming by the midterms? I say almost surely it’ll be slowing as the Fed finally starts trying to wring this not-so-transitory inflation out of the system.

Democrats believe that if the Supreme Court overturns Roe v. Wade in Dobbs v. Jackson Women’s Health Organization, it will ignite a surge in Democratic turnout. Maybe. But what if the court instead allows states to ban abortion only after 15 weeks? This might not cause the stir Democrats need. A recent survey by this paper found that 48% of voters support a 15-week abortion ban while 44% oppose it, not exactly a big winner for Democrats.

Democrats are right to be looking for turnout drivers. There’s a distinct lack of enthusiasm among young voters. This seems to be the reason for progressives’ demands that Mr. Biden unilaterally cancel all or most outstanding student-loan debt. But there are three problems. An executive order would face a certain court challenge. Not every young person would welcome it, especially those who’ve repaid their loans or didn’t incur any to begin with. And there’d be a 2010 tea-party-style reaction to such a bailout that could more than wipe out any gains for Democrats among grateful college debtors.

Could the Democratic fundraising edge—especially in Senate races—overcome this enthusiasm gap and the GOP advantages on the generic ballot? Cold hard cash could be dispositive in close races, but not if Republicans have enough money to be competitive. He who spends most doesn’t automatically win. Ask Sarah Gideon, Jaime Harrison and Amy McGrath. All outspent GOP incumbents in their 2020 Senate races but lost.

Here’s another scenario: Independents will find the administration’s election message of “jobs and results”—shots in the arms, a recovering jobs market, the bipartisan infrastructure bill—more appealing than the Republican focus on inflation, immigration, crime and cultural issues. This seems possible but unlikely. It was the previous Oval Office occupant who delivered the vaccines in record time, the job market is healing itself as the pandemic fades (slowly too), and there aren’t shovel-ready projects. Didn’t Mr. Biden learn from the unpopularity of the 2009 stimulus?

Democrats will try to turn the campaign into a referendum on Donald Trump, attempting to peel off some of the 74% of independents and 37% of Republicans in last December’s Washington Post poll who say there’s “no solid evidence” that “there was widespread voter fraud” in 2020.

Making Mr. Trump the center of electoral attention requires his cooperation. That could happen. The former president seems addicted to the adulation he receives at his rallies. But his domination of the political scene miniaturizes candidates he’s trying to advance, albeit perhaps temporarily. Most of them will recognize the danger of featuring him in their campaigns and politely steer clear.

While some of these scenarios may happen in some form, there’s little chance they’ll add up to a material improvement in the Democratic Party’s position this fall. When Democratic strategists go on the record acknowledging how bad the midterm prospects are for their party, you can safely assume they face a shellacking. The recriminations and finger-pointing have already begun.

Mr. Rove helped organize the political-action committee American Crossroads and is author of “The Triumph of William McKinley” (Simon & Schuster, 2015). 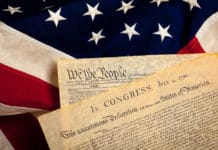 Passover and the Constitution