Home Tax Policy The tax cut America can’t do without 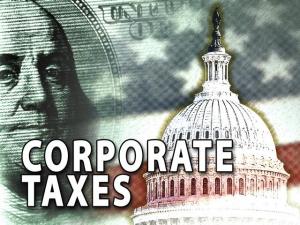 How much should corporations pay in taxes? The enclosed table shows average corporate tax rates by country. You will notice that the United States has by far the highest tax rate. (Note: Some countries, notably Canada, Switzerland and the United States, are federal republics and have both federal and state/provincial corporate taxes, so the maximum tax rate can vary within the country.) 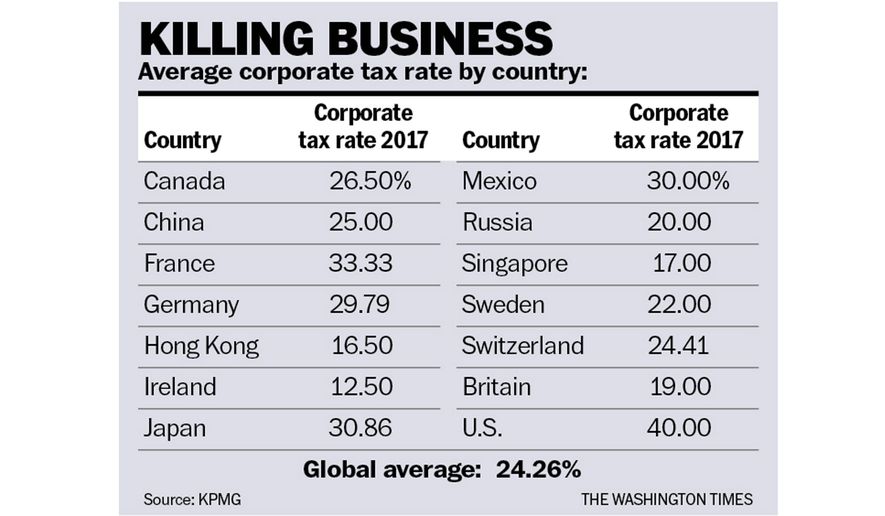 The late congressman and Department of Housing and Urban Development Secretary Jack Kemp, who was a major figure in U.S. economic policy from the 1970s to the 1990s, never tired of telling audiences of blue-collar workers that “you cannot love the employee and hate the employer.” Jack (as everyone called him), a former professional football quarterback, ironically became the greatest salesman for Reaganomics. He was a man of enormous physical and mental energy, who read deeply in economics and then preached the gospel of economic growth as no one did before or after.

He would ask his audiences: “How many truck drivers would you hire if there were no trucks?”

Jack Kemp’s parents owned a small trucking company and, as a boy, he saw how hard they worked and saved to build their company. When they accumulated enough money, they would buy another truck and then hire someone to drive it. The truck manufacturer created more jobs to build the trucks for the Kemp family and thousands of others.

Whether it is a small family trucking company or a giant corporation, the process is the same. The company needs to acquire the funds in order to acquire the machinery and hire the workers to operate them. The more savings and investment is taxed, the less capital formation, resulting in lower productivity, economic growth and job creation.

The U.S. corporate income tax rate is comprised of a federal rate of 35 percent and an average of 5 percent for the states, giving an average 40 percent rate. The corporate tax has long been recognized by economists as one of the worst taxes. Despite all of the talk about “greedy corporations,” corporations are merely a way of doing business. The corporation does not “pay” the tax, only individuals pay taxes — so the corporate tax is passed along to consumers in terms of higher prices, to the stockholders in terms of lower dividends and capital gains, and to the workers in terms of lower wages. Recent studies have shown that most of the corporate tax falls on the workers. Consumers resist higher prices and can often buy similar goods and services from foreign producers where the tax rate is lower. Investors have many options — both in form and location, including the entire globe — as to where to put their money. The worker has fewer options and hence suffers most from the corporate tax.

American companies have been fleeing to foreign countries because of the huge differential in corporate tax rates. Their officers have a fiduciary responsibility to the stockholders to protect their investment. And if their foreign competitors have an advantage in lower taxes, in order to survive and prosper, the American companies are forced to move.

American corporations are now reported to have more than $3 trillion outside the country, which they are reluctant to bring back to the United States because of how heavily it would be taxed. We now have the absurd situation where Apple borrows money (in the U.S.) to pay dividends to its stockholders, while at the same time holding a couple of hundred billion dollars overseas. That means it is cheaper to pay the interest than to bring the money home because of the tax.

President Trump has presented several very sound principles for tax reform. Yet, without the details being presented, the tax reform effort is already being attacked by the Democratic leadership. Reasonable people can differ about how much to reduce the corporate tax rate, but to claim that any corporate tax rate cut is a giveaway to the rich is merely an appeal to ignorance. As explained above, both consumers, investors and particularly workers are hurt by the corporate tax. Most corporations are not just owned by a few rich guys. Most companies have pension funds as major stockholders. These pension funds are designed to provide retirement security for American workers. So, why would one advocate taxing them more?

Some who only view the world in static terms say we cannot afford a corporate tax rate cut. Our relative economic pie is getting smaller compared to the rest of the world. Without cutting our noncompetitive corporate tax rate, businesses will continue to move to the rest of the world, leaving fewer jobs for Americans and less to tax. Rapid economic growth is the key to higher tax revenues, not high rates. And by the way, there are those $3 trillion that want to come back home, but only if it is taxed at reasonable rates. Properly structured tax cuts do not “pay” for themselves immediately, but they do over time. The Reagan tax cuts took about seven years to “pay” for themselves, but in the meantime many millions obtained jobs at higher real wages, which would not have happened without the tax cut. Congress should learn from that experience and do it again.